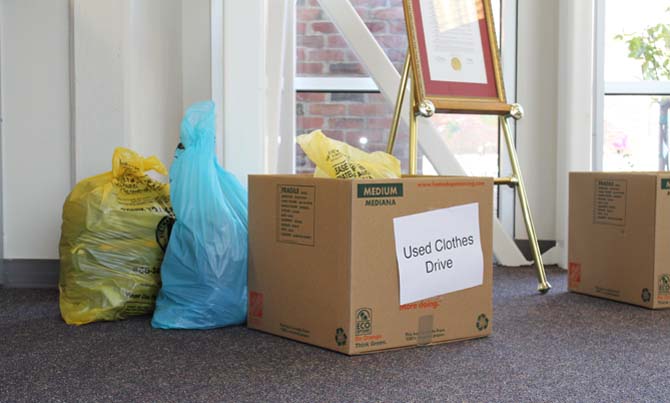 Clothing donations lie in the office’s box for the clothes drive organized by Interact and FBLA. Donations will be given to Seventh Generation Recycling, a local company that distributes and recycles new and used clothing. Photo by Carissa Chan.

Two clubs on campus, Interact and FBLA’s Partnership with Business project, are holding a used clothes drive to benefit local communities. The clubs are working closely with Seventh Generation Recycling, a company that distributes clothes in good condition to low-income families in the Bay Area. Unusable clothing will be recycled into textiles to be sold to other companies for profit. Both new and used clothes, including shoes, will be accepted as donations to Seventh Generation Recycling.

According to Interact’s Project Connecting Community committee chair junior Srisruthi Ramesh, the club originally planned to host their own clothes drive and donate clothes to Goodwill. But after hearing that FBLA was looking for a company to work with, Ramesh arranged for the two clubs to combine their efforts and donate to Seventh Generation Recycling during the month of November.

FBLA Director of Partnership with Business junior Keshav Santhanam explained that working with Seventh Generation Recycling has given members an opportunity to help the community while fulfilling their business interests.

“[Our members] are excited to be working closely with a business partner,” Santhanam said. “It’s a way to actually go out and do marketing and research and apply it [to the community].”

Both Interact and FBLA have been actively seeking ways to make donating more accessible to as many students as possible. Because MVHS received only one official Seventh Generation Recycling bin, Interact and FBLA officers have placed their own additional donation boxes around the campus.

“Hopefully, people will be more willing to donate since it’s so easy,” Ramesh said.

Donations of new or used clothing can be placed in the boxes in the library and office until Nov. 23.