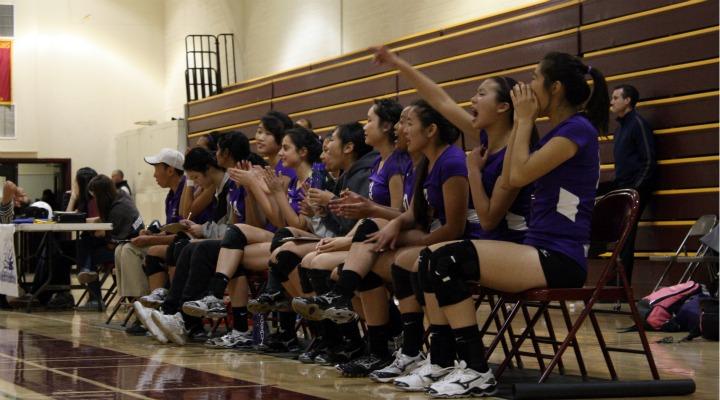 Patrick Xie
Odds were not on the Matadors’ side as No. 10 MVHS faced No. 2 Menlo-Atherton High School on Nov. 10. However, after a big five-set win at San Benito they hoped the momentum would help them in their quarter-final game.“I was hoping we would bring our A game and that it would be one of our best matches ever,” senior Savannah Day said. “If we did lose then I hope we would go out with a bang at least.”Unfortunately, the match did not end in the bang Day was looking for and proved to be a tough match to end the season, losing to the Menlo-Atherton Bears, 19-25, 10-25, 8-25. The Matadors were able to compete against the Bears in the first set, but in the later sets, their inability to return serves and block spikes led to the loss.

In the first game, it seemed that this match would be another tough battle for the Matadors. The momentum from the San Benito game, however, could be seen early in the match, as the Matadors surprised the Bears in the first set with strong plays. But as the game went on the Bears were able to get ahead and took a big 21-14 lead. The Matadors rallied back as they won 5 points in a row, but were unable to continue the streak as they eventually lost the first set 19-25.

“Game two we got a little tight and just started doubting ourselves to play as we usually do,” head coach Colin Anderson said. “We [thought] too much and you could see the mistakes.”

The third set started better than the second set as the Matadors were able to get some early points, but by the end of the set none of the players were unable to get through the steady play and strong blocks by the Bears. Again the Matadors had trouble returning the serves and were unable to block powerful spikes by the Bears. The Matadors eventually lost 12 points in a row at the end of the set to lose the third match 8-25.

“I think that all our hard work was not shown in this match,” Day said. “All the stuff we have been through wasn’t here tonight and I really wish it was.”

Even though their last game of the season may not have ended in the way they wished,the team still had a season filled with accomplishments. This year had a team with 18 different players that was able to win key games against some tough teams in the league, such as the fifth seed, Homestead.

“I am really proud of us for being able to trouble all the way to San Benito and then being able to beat them there,” Day said. “Even though today may not have gone as well as we hoped, overall we did well.”