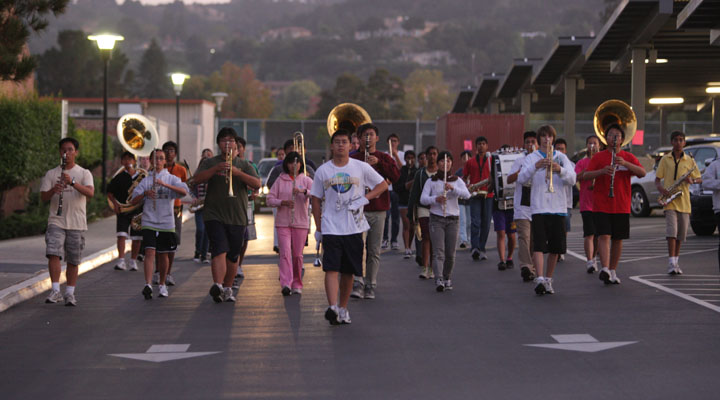 At 5:30 a.m. on Nov. 12, Marching Band will assemble at school and at 6 a.m., pile into buses headed for the Vintage Band Review in Napa Valley.

The Vintage Band Review is the band’s third competition this season, following the Oct. 8 Tournament of Bands and the Oct. 22 competition in Pleasanton. Marching band season will close Nov. 19, when the band will participate in the 57th Arcadia Invitational Band Review in Southern California.

The components of a competition
Competitions follow a parade format, in which the band plays a traditional march and marches in a formation, usually a block, while Color Guard — a subset of the marching band during the fall season — performs a routine. The band is judged based on their music, marching and showmanship; Color Guard and the drum major are scored separately.

Bands compete within a specific division based on their sizes. Marching Band will compete against six other bands in its division at Napa Valley and against eight other bands at Arcadia. According to Marching Band director Jon Fey, of the 39 bands that will participate in the latter competition, MVHS may be the only group from Northern California.

Four-year Color Guard member senior Eileen The is particularly looking forward to the Arcadia competition, after which marching band will head over to Disneyland.

“This is the first time for me that we’ve had an overnight trip for Color Guard, so it’s really exciting,” The said.

Getting ready to march for the judges
When preparing for a competition, the band refines both marching and musical technique and Color Guard practices their routine. Marching band rehearses every Tuesday for three hours and every Saturday from 9 a.m. to 5 p.m.

The band placed fifth out of six in their division at TOB this year, although according to Fey, the band was not placed in the correct division. At Pleasanton, the band placed third out of six, missing second place by .05 points and first by .25 points. Color Guard placed second at TOB and first at Pleasanton.

While Fey noted that band placed higher in competitions during the last school year, he believes that the group has markedly improved.

“Ability-wise and score-wise, we started this year where we ended last year,” Fey said. “The scores have been going up consistently every competition this year. We’re excited to see what will come about from our work these last couple weeks.”

Fey attributes the improvement to both the marching band staff and the members.

“We have a great staff, a really great core group of kids that are pushing the [the first year members],” Fey said. “The first year members are really stepping up to the challenge and … raising their level of performance to match the seniors, and I think we’re reaping some of the benefits.”