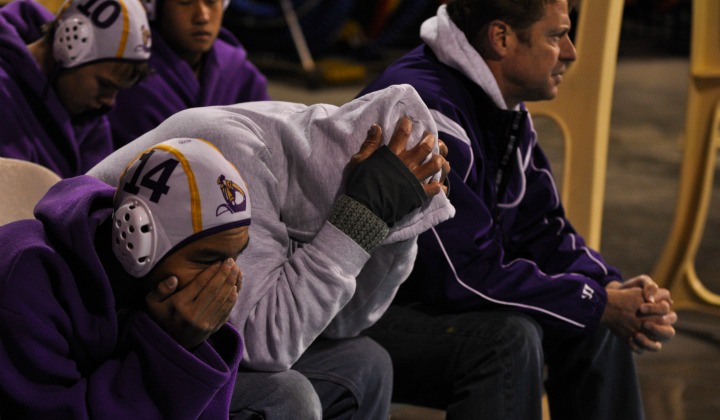 Elvin Wong
The Matadors record (15-16) meant that there was no chance for an automatic qualification into CCS. But the boys varsity water polo team did make it to CCS through a lucky wild card, the Matadors had an opportunity to play one more game on Nov. 8 against Serra High School. Unfortunately, they were unable to get past the first round after they could not hold onto their lead going into the fourth period.

“We are the underdogs by far,” junior Brendan Duffy said. “We knew it would be tough, but we kept through it. We knew we just had to play our hearts out in this game.”

From the start, the Matadors shocked everyone as Duffy led the strong start by scoring a full court shot as the first goal and would later add on to to help put the lead at 4-2 with two minutes left in the first period. The team was able to keep up their two goal lead, ending the first period 5-3.

“We came out with great intensity,” Duffy said. “We scored the first goal and we just never looked back from there, but things just did not go our way in the end.”

In the second period, the team was able to further outplay SHS to expand the lead to three by the end of the first half. Sophomore Colin Hong and senior Cameron Yates were able to retaliate after a quick SHS goal in the beginning to the period to bring their lead to 7-4.

Within the last minute of the period, SHS was able to break through the Matador defense to cut down the lead, but Hong would not let that stay for long. With 12 seconds left in the period he scored a goal to bring the lead back to three, score 8-5.

“I thought the first two quarters we definitely came out and shocked them,” Yates said. “They didn’t know what hit them.”

Both teams came out to the third period, with strong defense and offense by both sides as the scoring in the later periods began to die down. The Matadors only needed one more period to go to make it to the next round. But a shaky defense and inability to complete their scoring chances led to their loss.

The fourth period, SHS took over as they had most of the offense throughout the period and was able to break through the Matadors defense constantly. The Matadors, on the other hand, had trouble with their offense as they were unable to score any goals in the last period, despite a few good chances. Within the span of two minutes, the Matadors lead vanished, and the teams were tied with less than four minutes in the game.

“The fourth quarter we had some mental break-downs that led them to coming back and winning,” Yates said.

SHS offense was relentless — they were able to score their fourth consecutive goal of the period with 1:43 left in the period to take the lead. With one minute left in the game, the Matadors had to score to keep themselves in the game and the tournament. The Matadors had one final chance to get the tying goal and only twenty-five seconds left in the game. Junior Jeffrey Lee drove through the defense and took the final shot of the game, but with no avail as Serra’s goalie junior Steven Olujic was able to block it to solidify the win.

For the Matadors, the loss means a disqualification from CCS. The opportunity was given to them, but they were unable to capitalize on their chance.

“That’s the best we have ever played,” Duffy said. “No regrets. Even though we lost, its a tough loss, but that’s how we play — that’s our potential right there.”