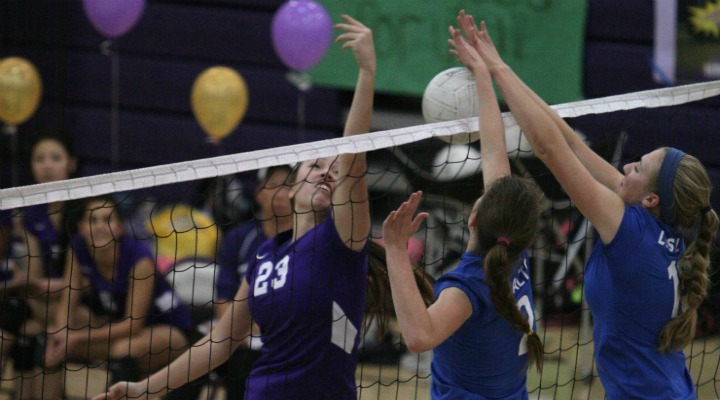 Key plays were made by Day and sophomore Beverley Yu in the second game of the match. The game remained neck and neck throughout as both teams picked up their offensive strategies to slam the ball in the court. Despite a strong effort, the Matadors lost 20-25 and headed into the determining game of the match.

The third game was filled with kills by the Matadors, as they stole the lead 7-5. Another defensive lapse allowed the LAHS to gain a 12-11 lead, but Day tied the game up soon after with a powerful hit down the line. The teams held long and intense rallies throughout the game, keeping the score close.

“I think we started off well because we had a lot of energy and everyone was pumped up, but right when [LAHS] started to earn more points, we started to die out,” senior Hitomi Sugimoto said. “Overall, I think we fought all the way through and had a lot of good plays.”

Down by just three points, Chew made a diving save in the back left. This allowed sophomore Maria Balus to set Day, who slammed the ball down the line to bring the score to a close 19-21. After a timeout called by the Matadors, the team’s momentum boosted, and the Matadors held serve to win the game 25-21.

Senior Carmella Vong began the fourth game with a kill down line to the Matadors at an early lead. With saves by Chew, exceptional serving by the team and powerful spikes by Day, the Matadors put up a strong fight against LAHS. In the end, the Matadors lost 18-25 but were still congratulated by the large support team in the stands.

“We came together really well, and even though we lost, we played a good game,” senior captain Stephanie Zhang said.

The girls varsity volleyball team ended with an overall 15-16-0 record and is headed to CCS due to their exceptional play in non-league tournaments.