On my own: Express lane towards self-sufficiency 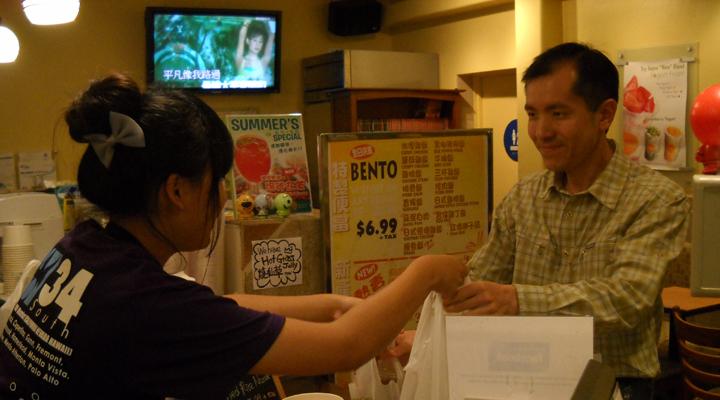 Cheerfully greeting customers from the counter as they walk in the door of Tapioca Express, senior Kathy Fu has a name tag that says it all: “I’m new.”

This is her third week on the job. Right now, as a trainee at the cash register, she’s working four days a week, three to five hours at a time. And she’s loving every minute of it.

Having a job has been Fu’s ambition for the past four years. She wanted her own money to spend so she could pursue her passion in art. However, her mother, Lisa Yu, continually shot down the idea, believing her daughter wasn’t ready to work and had to focus on academics instead. Still, Fu persisted, asking her mother whether she could get a job every so often.

Fu has not lived with her mother for her entire life, which explains why she is so independent and self-driven. In fact, her four years at MVHS have been the longest stretch of time she has ever lived with her mother. Before coming to Cupertino, she frequently had to move back and forth between China and the United States to live with only one parent at a time. As a result, Fu has learned to rely on herself more than her mother.

“I think it’s a good thing that I grew up not really with her,” she said. “You’re going to have to leave your parents sooner or later, so it’s better to get used to it earlier than to have to adapt later.”

This year, all the signs were in favor of Fu finally working. Faced with free sixth and seventh periods, she thought a job would be better than wasting her time doing nothing at home. In addition, Yu had recently stopped giving Fu an allowance, leaving her in need of cash for art supplies. Believing her daughter was now mature enough for a job, Yu finally agreed to let her daughter work. And when Fu learned that Tapioca Express was hiring, she decided to apply. The extra cash has helped her feel liberated.

“It’s more free when you spend your own money,” Fu explained, “‘cause if you want to buy something you can just buy it instead of your parents being like ‘oh but you don’t make money, blah blah blah.’”

But Fu’s independence won’t simply end with her getting the job at Tapioca Express. She plans on moving out during high school if she earns enough money when her full-length shifts begin. Even if she doesn’t, though, Fu wants to become more autonomous once in college — after all, she prefers not to live in the same city as her parents nor receive financial support from them.

In the meantime, Fu works late afternoons and early evenings, manning the cash register, scribbling down customers’ requests on clear plastic tray covers, and cleaning the café’s rectangular tables. Right now, she doesn’t do any of the cooking or beverage-making; she merely greets customers and handles their orders.

So what’s the best part of her job? “[It’s] the amazingness of earning your own money and spending it the way you like,” Fu said. “And the idea that you don’t have to be dependent on anyone anymore.”