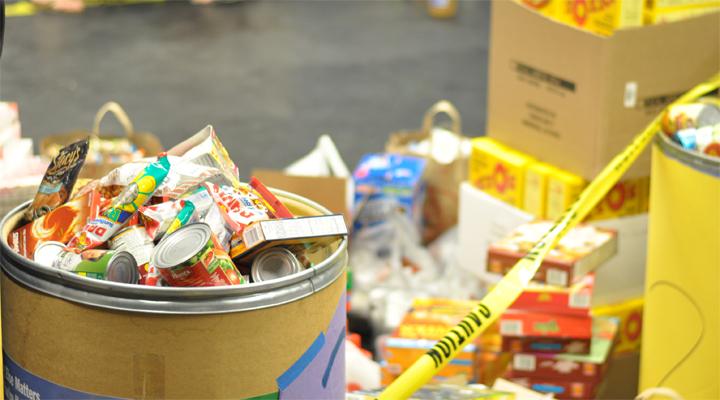 By the end of the week, MVHS had gotten it down to a science: Boxes of cereal were worth the most Homecoming points per dollar spent. So were large jars of peanut butter. Needed some more points the night before the final day so your class could win? No problem. PW Market had cereal at four for $4 and peanut butter at three for $2.50.

These weren’t words that sounded characteristic of a kind-hearted donation drive. They sounded like words of calculated class warfare. Donations of food were the artillery. Bills and coins passed around inside giant orange envelopes were the bullets. After all, each class was trying to destroy the others.

Sure, there were actions of selflessness during the competition. The class of 2012 dispatched senior Ben Yang to buy all the ramen he could get his hands on with the class’s money. Juniors Lyan Cogan, Trisha Mitra, Serena Chew, and Sanjeev Ranga promised via Tumblr to personally match every single donation by the others in their grade.

But for what? Students probably weren’t thinking of needy families as they were piling container upon container of food into the backs of their minivans at a Safeway on the last day for donations. They were probably thinking about the points — how they could help their class win the food portion of Homecoming Week. Not generosity. That’s how the school was able to raise a combined total of 19,980 points.

The Homecoming Food Drive was a failure of principle. The ends of the competition were good; no one can deny that raising so much food for the Second Harvest Food Bank is a bad thing. After last year’s flop, this year was definitely much more successful. But the means weren’t noble at all. Classes turned it from a casual food drive to a cut-throat competition. Instead of giving too little for the right reason, we gave too much for the wrong one.

It wouldn’t be hard to find a happy medium if Leadership decides to bring back the food drives in the future. A good way to do so would be to scale down the weight of the Drive down to only 5% of Homecoming Week. It would decrease the incentive for each class to aggressively compete for the most amount of food, yet still be enough to cause classes to donate.

Hopefully that will result in fewer mad rushes to the supermarket for boxes of cereal and packets of ramen next time. And in the time saved, we’ll be able to remember that we’re supposed to be giving for the sake of helping others, not for helping our own classes win a competition that might not matter four years down the road.