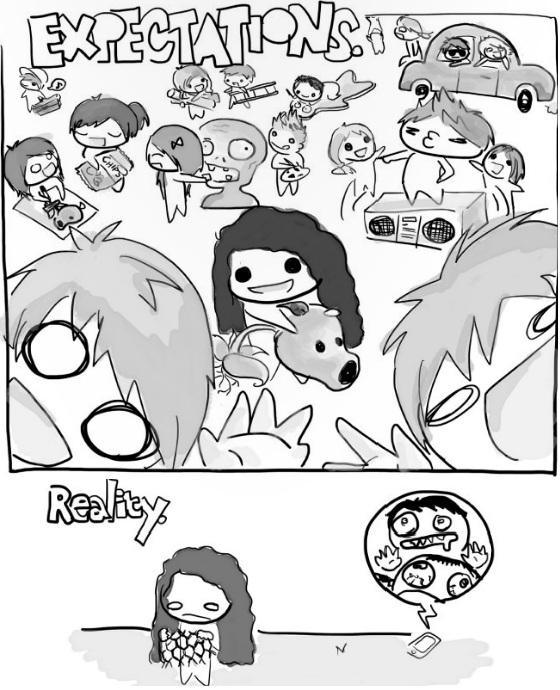 I have only been to quad decs once, back in the day when we built floats. I went to gawk at the floats for a mere five minutes, and then left.

I have only been to a rally once, back in the day when  we assumed rallies were mandatory. I stepped inside, ran my eyes over the huge masses of screaming Matadors inside the gym, then promptly stepped out. I spent the rest of the allotted time, roaming the C building, fabricating a la-la land with a friend. Those were the days.

So I have become the 2013 class officers’ worst nightmare: an apathetic, aloof, and nerdy student who studies math during rallies. I now endure a two centimeter scratch and three red welts as atonement for my sin of unspirited-ness.

I spent forty-five minutes of a post-SAT morning at 2013 quad decorations. I expected to be a huge party with blaring loudspeakers, tons of people, and power tools.

I showed up at the address given, and a man opened the door.

He told me they were in the backyard.

I thanked him and went to the backyard to find out that “they” was only one person: vice president Nikitas Kanellakopoulos. I am infamous in my circles for being unspirited, so I expected he would be shocked to see me there. I would say that he was not.  I ended up spending forty-five minutes of extreme awkward turtle-ness cutting chicken wire to be staple-gunned onto the zombie (which I thought was a black and white chocolate candy man) and flowers.

Not a single non-officer, besides me, was there. And I thought I lacked spirit. That means that there are about 400 other unspirited juniors like me roaming the halls of Monta Vista. The only way the officers can cope with that is to simply spend the bulk of their weekends at quad dec to finish the job themselves.

Using my newly acquired Facebook the night before, I saw on the class page that they were in need of materials: bedsheets and newspapers (I gasped at the thought of El Estoques being put to use for quad decks), as well as hands to do work. My time at quad decs showed me that they were still in need of both.

Although I couldn’t give them bedsheets, I was able to give them physical labor. If you pass by the 2013 quad deck, you can see my masterpiece—the wire cage on the left elbow of the zombie, the left leaf of one flower, and the right leaf of another.

It really surprised me how much I got done in 45 minutes. And if the whole class could come for even half an hour, well, the 2013 quad deck would be “13oss.“

So get out there, and make sure you bring a friend because the last thing you want is 45 minutes of awkward turtle-ness. You’ll not only save the officers some sweat, but you’ll learn some great life lessons.