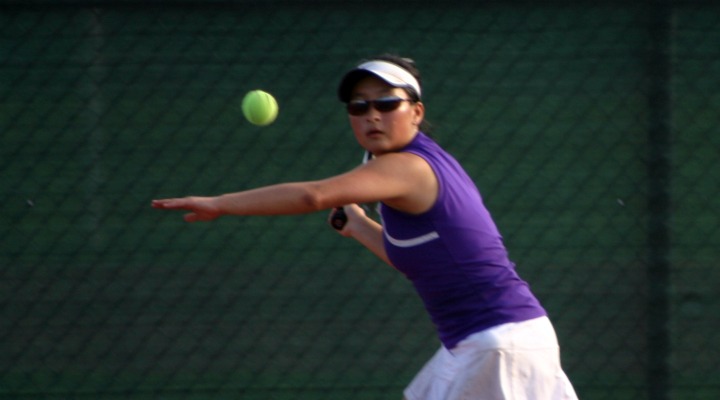 Two big days. Two strong teams. Another two wins. The varsity girls tennis team continue their 13-0 undefeated run as they defeated Saratoga High School, the defending CCS and NorCal champion, after beating Menlo High School 6-1 just the day before. They have been unstoppable all season long and Sept. 29 proved again why they are undefeated this season as they beat the Falcons 4-3.

“It was a real tight match,” head coach Gene Fortino said. “Whenever we play it is going to be a really tight match and I am really proud of the girls. We played Menlo yesterday, which is one of the top teams in NorCal as well, so to win two days in a row to two quality teams is really hard to do.”

The number one singles, junior Wendi Kong, and number two singles, junior Jody Law, both lost to their opponents to straight sets to mark the first couple losses of the day. Meanwhile, number three doubles, senior Claire Chin and freshman Nicole Stomakhin, had trouble with their opponents losing 3-6,3-6. The Falcons got up to a quick 3-0 lead over the Matadors with only one win away from clinching the win.

“We knew the other 4 were still winnable,” Fortino said. “We were still optimistic. Even though we are down 3-0, we still feel like we had a solid chance.”

That never stopped the Matadors as the rest of the team supported the early losses with four key wins. The number one and two doubles were able to win their games in straight sets, while number four singles sophomore Kelsey Chong played a heated match with her opponent freshman Smita Sabada. Long rallies and strong play on both sides kept every game close, but in the end Chong was able to outplay her opponent to win 6-2, 7-5.

The early 3-0 lead by the Falcons evaporated as now the score was 3-3. After most of the games were finished, there was only one match left. Number three singles freshman Aiswarya Sankar versus junior Nikki Bedekar. The pressure was on her shoulders to finish up her match and take the win for the Matadors. By the time the second the last match finished, Sankar was already up in the second set. She only needed one game to beat the Falcons.

“It was 5-2 at the time and I had to win, so I went for my shots and tried to finish it as soon as I could,” Sankar said.

Sankar had a comfortable lead by the time everyone was finished—but that did not stop Sankar from going straight for the win, knowing that she was in control of the deciding match. By capitalizing on Sabada’s unforced errors and keeping rallies going, Sankar was able to win the last match of the day 6-4, 6-2.

The Matadors’ next home game is on Oct. 11 against Los Altos.

This work is licensed under a Creative Commons Attribution-NoDerivs 3.0 Unported License.