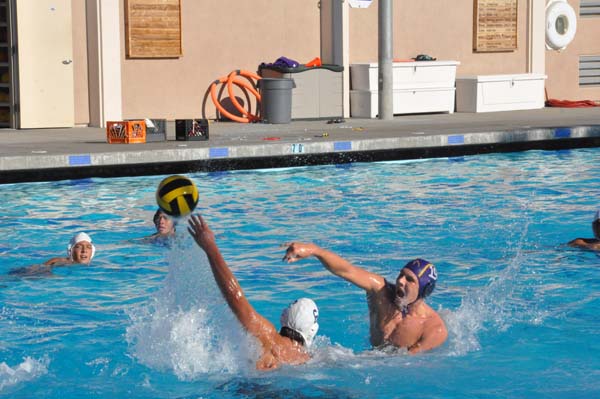 Senior Cameron Yates throws the ball past a Pioneer player to score one of his five goals. Photo by Carissa Chan.

The varsity boys water polo team won in a scrimmage against Pioneer High School on Aug. 26, finishing with a final score of 15-6. Standout plays included performances by junior Brendan Duffy and senior Cameron Yates, who scored seven and five goals respectively, as well as by junior goalie Owen Hardee, who made nine blocks.

The scrimmage, which was regulated by coaches from both of the teams instead of by referees, gave the team the chance to play together in a live game setting. It also allowed the coaches and players to test out different players and formations and understand what they need to work on in order to have the most successful season possible this year.

“We definitely need to work on looking for the ball and connecting,” Hardee said. “We’re dropping the ball, both literally and figuratively … and we need to make better throws.”

The team’s first official game will be at Mountain View High School on Sept. 13 at 3:30 pm.