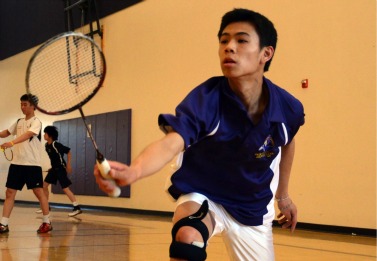 Every year since its construction, MVHS has hosted the CCS (Central Coast Section) badminton tournament in the field house, giving the Matadors that qualify an automatic home field advantage.Junior Jessica Dinh and freshman Stephanie Lam (girls’ singles), senior Gary Wang (boys’ singles), seniors Angela Gu and Alex Shung (mixed doubles), and juniors Sihua Xu and Michelle Jiang (girls’ doubles), all had the benefit of playing at home from May 26 to May 28 for CCS.Day 1Girls’ DoublesXu and Jiang came out of the first day of tournament play with a close and hard fought win. The girls lost a tight first game 13-15, but came back in game number two with a 15-9 win. Xu and Jiang won the third set 17-15. The game and match point was a drop shot that barely rolled over the tape of the net onto the opponents’ side of the court.The girls lost to Catherine Wu and Linda Zhang of Gunn high school in two games by the score of 15-3 and 15-11. The tournament is double elimination and Xu and Jiang will play in the losers bracket. They can make it to the finals of the tournament if they win the rest of their games.  Boys’ SinglesWang came into the CCS tournament as the second seed in the boys’ singles bracket. Wang, who has a successful CCS track record, won his first match of the tournament in two games straight, 15-9 and 15-10.Wang maintained control throughout both of the games but allowed his opponent, Yusuf Chang from Westmoor High School, to stay within striking range by committing unforced errors. The number one error was hitting long or wide of the court. Wang will play 11th seeded Eric Yee from Santa Clara High School tomorrow.Girls’ SinglesNinth-seeded Dinh overcame her first round loss (15-6, 15-9) to Queenie Daniela of South San Francisco High School with a win over 8th seed Ada Tan of Live Oak. Dinh’s play improved in her second match of the day winning handily in two straight games with the score of 15-2 and 15-4. Like the MVHS girls’ doubles team, Dinh’s 1-1 record puts her in the losers bracket.As the second seed in the bracket, Lam had a bye for the first round of play. In the second round, Lam beat Tiffany Ha of Santa Teresa High School 15-8, 15-4. She will take on the third seed, Josephine Liang of Prospect High School, in the next round tomorrow afternoon.Mixed DoublesShung and Gu came up with two back to back wins on day one. Despite being seeded 12th, they beat higher ranked opponents. In the first game the senior duo defeated Joe Tun and Yvonne Li of Westmoor High School 15-5, 15-5. The second game was even better for Shung and Gu. They secured a quick 15-1, 15-7 victory over cross-town opponents from Cupertino High School, Terry Chu and Menglin Ruan.Day 3Santa Clara High School’s Eric Yee withdrew after suffering an injury versus MVHS senior Gary Wang (15-13, retired)Wang was able to control his hits and move Yee around the court throughout the whole game, allowing him to claim the victory and advance to the next round for CCS champion. Although Yee won the first point of the match, Wang retaliated by stealing the lead 3-1 with a smash into the corner of the court far from Yee. Wang carefully made a drop shot to bring Yee up to the front, but when Yee hit the birdie high over the net, Wang intercepted it and smashed it over Yee’s head to put himself up 10-7. The pair continued to push for points out on the court with powerful shots and consistent rallies. With a drive in momentum and wisely placed shots, Gary took the game with a close 15-13 win. Due to severe cramps, Yee was unable to play the second game of the match and Wang won by default. Wang moved on to play Saratoga High School’s Jeffrey Kuo in the championship bracket, but was unable to win it all, losing 9-15, 12-15, 9-15. However, the tournament went perfectly for freshman Stephanie Lam, who took first place in girls’ singles. Junior Jessica Dinh took fourth place in girls’ singles and seniors Angela Gu and Alex Shung took fourth place in mixed.