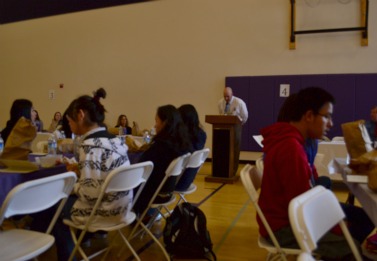 The Purple and Gold Awards take place in May each year. In these awards, teachers recognize their best students in a given category. This is an admirable goal, though halfhearted in execution. If we could improve the system in small ways, the awards will come to be something that will benefit the whole school, rather than just a small portion.For one, some teachers simply don’t nominate students, whether it’s because they don’t have the time or because they do not care. Well, if it was required, all teachers would just need to take a few minutes to think about which student stood out to them from all of their classes in a given subject, and nominate that student. This way, deserving students aren’t shortchanged if their teachers simply opt out because teachers can. It isn’t all that difficult, and once the Purple and Gold awards gain momentum, teachers as well as students will take it more seriously. Several students simply didn’t show up to the Purple and Gold Awards. It seemed a rather private affair—there were so few nominated, and there were even fewer in attendance. Now, if this had the prestige of the Senior Awards ceremony, nothing would prevent them from coming because it was that big of a deal.