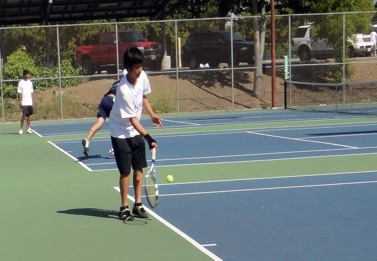 Head coach Bruce Becker kept telling his team they needed one more set to move on to CCS semifinals.Then it was one more game. And suddenly, it was just the match point. That is when junior Rynosuke Goto delivered one of the most important forehands of the year to send the Matadors to the highest CCS round in Becker’s six-year tenure as coach.On May 9, the varsity boys tennis team traveled to Leland High School to take on the Chargers for the CCS quarterfinals. Early on, an easy win was supposedly in the books as junior Nathan Law easily defeated his opponent 6-3, 6-0 in varsity 2 singles. Freshman Edward Ang also contributed by dominating his match 6-2, 6-0 in varsity 3 singles, and sophomores Jonathon Tsao and Sudev Chaluvadi chipped in a doubles 3 victory to push the lead over the Chargers 3-0.

“[My opponent] tried making me run,” Ang said. “But I felt light as lightning on my feet today.” Despite the good start, junior Dan Guo’s loss in varsity 4 singles gave MVHS the first loss of the afternoon and was soon followed by a loss in doubles 1 with sophomore Jeremy Liu and senior Ryan Mui falling 0-6, 5-7. Now only up 3-2 in the series, the Matadors waited anxiously for the outcome of varsity 1 singles, where senior Amreet Mohanty was immersed in a close match with LHS freshman Michael Nguyen.  Meanwhile, in the doubles 2 match, Goto and freshman Saxon Day fell behind in the second set 5-2 after winning the first 7-6.  With members of the team yelling support from the sidelines, Goto and Day began a determined comeback. After winning four consecutive games, the pair put the icing on the cake off of one final skim past their opponent’s racket to finish and finished with a final score of 7-6, 7-5. “[It was] a pivotal match,” varsity tennis coach Bruce Becker said. “A tiebreak and 7-5. You can’t get any closer than that.” The stunning finish at doubles 2 gave the Matadors the necessary majority of games to clinch the series. On the other side of the court, Mohanty pushed through the intense competition by staging a comeback of his own after being down 4-0 in the third set. However, the match ended in a close loss, though it did not affect the team’s berth to the next round. “It was a team effort,”  Becker said. “Even though number one [singles] loses, he’s holding the position. It doesn’t matter who wins what match as long as we win four or more.”For many of the players, the competition against Leland was so close that they played through some of their most agonizing matches of the entire year.“It was actually the most intense match of the season for me,” Goto said. “And the players [we were playing] were really good. Probably one of the best we’ve played so far.” The team will take on Menlo School, which swept Los Altos 7-0 in its quarterfinal match, in the semifinals. The Eagles are one of the top tennis programs in Northern California and won the California High School Boys Tennis Classic Division II title earlier this year. “It’s fun to play against good players,” Becker said with a wry smile when asked what to expect in the next round. “We’ll do alright.”Semifinals between Menlo and MVHS will take place at Courtside Club of Los Altos on May 11.