Tennis: Varsity moves on to second round of CCS 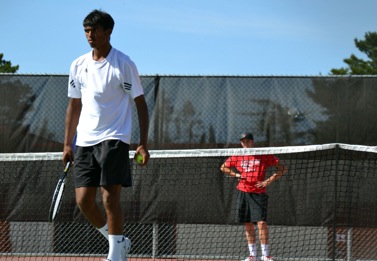 Crucial wins in doubles allow for an easy 6-1 finish

A humid afternoon with unusually high temperatures. Exhausted players recovering from a stressful week. The first day of the CCS tournament against a feisty opponent.Would this become a recipe for disaster? Not exactly. The fifth-seeded varsity tennis team avoided an upset by sending the lower-ranked Carmel High School Padres home in a 6-1 triumph on May 6. The doubles led the way with the excellent performance of the first team, led by senior Ryan Mui and sophomore Jeremy Liu . The two, along with the second team featuring freshman Saxon Day and junior Rynosuke Goto, barely broke a sweat and beat the Padres in straight sets. “[Carmel] had strong players with big shots,” freshman Edward Ang said. “But we were able to use their pace against them by adding spin to our shots.”

Despite the doubles teams’ effortless play, the singles players seemed to be uncharacteristically affected by the warm weather. Still, MVHS persevered to claim three of the four matches.The lone loss of the afternoon came from junior Dan Guo in the third singles spot, who missed the past week’s practices because of AP testing.“I felt like a sofa out there on the court,” Guo said. “It felt really hot today.”All but one of the seven matches finished in less than two hours, with five games captured by the Matadors. Since the CCS tournament goes by a best-of-seven format, MVHS easily clinched the series long before the end of the last game, in which senior Amreet Mohanty took on Padre senior Russell Poole in singles one. Though Mohanty had trouble ending the game, an extra thirty minutes was plenty of time for him to best senior Russell Poole with a final score of 6-4, 4-6 (10-5).With the win, the Matadors paved their way to the second round against Leland High School. For head coach Bruce Becker, the key to moving on beyond that lies with the strength of the doubles teams.“Our doubles have been playing well this year,” Becker said. “Ever since a few JV players moved up, we’ve been winning and we want to keep that up.”The team expects to have injured singles player junior Alan Nguyen back in time for the match against on May 9 at Leland.