Basketball officiating from the referee’s point of view 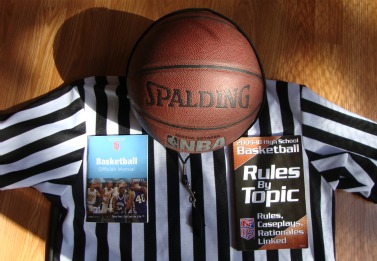 “Oh no!” “No way!” “C’mon Zebra!” Passionate cries against referees are commonplace, perhaps part of the basketball tradition itself. Most see them as too overbearing or too lenient — rarely is there an “in-between” view of the referees. Yet, referees still make the routine calls that elevate a game from a pick-up match to a real competition, such as with jump-ball administration and three-second counts in the key. Each person, be it a fan, player, or coach, has a different view on referees and the calls they make.What, then, is the true role the referee has to play in a regular game? Basically, the main role of the referee is to maintain fairness and safety in a game. In certain cases, some rules may have to go unenforced to keep that fairness. Should a little bounce of the ball following a rebound constitute a dribble?  Does it really put the offensive player at a disadvantage or is it something negligible? There is much more to the job than what is apparent at the surface. The preparation it takes to officiate basketball games is easily disregarded but still extremely critical. That, and the speed of the game makes basketball one of the hardest sports to officiate. What fans overlook

Some fans, understandably, have trouble understanding that the National Federation of High Schools (NFHS), NCAA, and NBA all play by different rules. Apply NBA rules to a high school game (with the NFHS rules that the Central Coast Section, or CCS, uses), and you’ll be left puzzled, dumbfounded even.Each level has a different style of play, thus a different set of rules is necessary in order to keep everything fair, although it’s granted that at the professional level (NBA), entertainment value is sometimes more important than fairness. The rule difference that annoys high school and college referees the most is the notion of “over the back.” The assumed rule is that when rebounding, a player cannot reach over someone in front to snag the rebound. This rule only applies in the NBA; “over the back” is only a foul in the NCAA and high school if a person is pushed from behind.However, the rule has been popularized in the NBA by the ESPN analysts, and it is seeping into the college and high school levels as fans start screaming for it to no avail. As long as the fans at high school games realize this distinction, suddenly everything will become much less contentious for the referees. Rule misconceptions are surely the biggest things fans overlook during a game. That is not to say referees are perfect, but this section should answer a majority of questions over certain calls at the high school level.The tough parts of the jobThe real difficulty in the job comes not in learning the rules, but being fluent enough with them so that calls become reactions. All the referees at the high school level, for instance, pass an examination, but some just cannot execute their knowledge on the court.

A late call creates a lot of doubt among the participants of the game, since they are accustomed to immediate calls. Even for complex calls such as the infamous block-charge, the referees have little time to think before expressing their decision.In football, officials have time to judge a play before throwing a flag. However, basketball not only demands a thorough background of rules knowledge from its officials, but it also demands quick and accurate calls—correct ones too. Sometimes, though, plays just happen too quickly for referees to distinguish the actions and make the call. Sure, the speed of the game and the complexity of the rules make the job difficult, but officiating is still manageable. Thus, difficulty does not excuse them from making the instantaneous, correct calls — calls that can have great influence over the flow of the game. How calls can change the gameLook no further than these two match-ups earlier in the NCAA tournament: Butler-Pitt and Texas-Arizona.In the first match-up, two critical foul calls were made in the last few seconds, including a foul on a free-throw rebound with less than two seconds left. With that foul, Butler University not only escaped with a victory, but they also advanced all the way to the Final Four. Five seconds was all it took for Texas’ season to end. Had the referee slowed his count a little bit or granted a timeout, the game would have been different. Nevertheless, Arizona won and did well also, but lost in the Elite Eight.

“Their goal is not to allow one team over the other to win but rather to ensure fairness and sometimes award calls for good defense.”

While most calls do not face as much scrutiny as the calls in the final moments of the NCAA games, they still show the influence that referees exert over the game. Their goal is not to allow one team over the other to win but rather to ensure fairness and sometimes award calls for good defense. (The five-second counts and the shot-clock violation are good examples.)Consequently, the pressure on referees is extremely high, especially in the heat of the moment. Such stress makes the job much harder than it seems on TV or even on the sidelines.Things referees still have to work onDespite the difficulty, referees should still be held to a high standard. There are calls that referees inexcusably mess up, and they have the responsibility to learn from such mistakes and improve. Most of those mistakes come from “reaction calls,” calls to which referees pay too little attention, and I classify them into three types.The first reaction call category is the it-appears-so-it-is category, most notable in botched traveling and palming calls. The second category is the mile-away category, where a referee far from the action, responsible for another coverage area, come in and make a call from across the court with obviously a worse view of the action.The worst reaction call of all is the I-didn’t-see-it-but-I’ll-call-randomly category. There is no excuse for the referees to lose coverage of the court. Even so, an appeal can always be made to the partner, just as the home plate umpire will ask for help on check-swings. Referees do have flaws, but they are human. All referees have good intentions to keep the game under reasonable control, so mistakes are a part of the job that we have to leave behind and forget.Dickson Tsai is currently a referee at a recreational youth basketball league at the Northwest YMCA. Dickson Tsai also reported for the girls basketball team earlier this year.{cc-by-nc-sa}