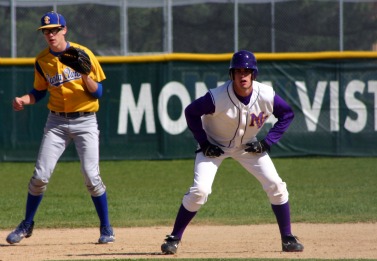 Matadors only score one run against great Santa Clara pitching

Maintaining undefeated status is difficult. The Santa Clara Bruins were the first threat facing MVHS in league play resulted in two straight losses for the Matadors. The Matadors (8-6, 6-2) had an undefeated league play until they started the week against the Santa Clara Bruins (8-7, 6-1) but have lost their second game to the Bruins on April 7. Pitcher junior Austin Burrow jumped to a a strong start by keeping the Bruins from scoring the first three innings, but a 3-run fourth by the Bruins made it impossible to mount a comeback. However, Burrow was still able to pitching five innings and allowing five hits.

However, Santa Clara senior Sean Oswald kept the Matador bats from hitting the ball, only allowing one run total in the seven innings pitched. “We just didn’t come in with any energy, any sense of urgency,” coach Brian Sullivan said. “It just wasn’t the same ball club today and it showed by only scoring one run.”MVHS started well by scoring the first run in the bottom of the third inning off a bad bounce on junior Matt Kelley’s hit through the center of the infield. But the Bruins caught up in the fourth inning, starting with a single from Oswald and then back to back doubles by SCHS juniors Matt Overy and Mickey Chaboya to give the Bruins the lead. From there, the Bruins offense kept the Matadors from scoring another run and further increased the lead. The Matadors got a hit in every inning except the sixth but were unable to chain together enough hits to get a run. The Bruins continued their offense into the seventh inning by adding two more runs to extend the lead to 7-1, putting the game out of reach. The bottom of the seventh inning looked good in the beginning for the Matadors after a single from senior Zach James, but he was later caught in a rundown for the first out. After that the Matadors were not able to get any runs from their last inning. “[Santa Clara] is just one of those teams that no matter what the records are it always seems to be a tough win,” Sullivan said.The Matadors’ next home game will be on April 14 against Fremont (5-8, 0-5).