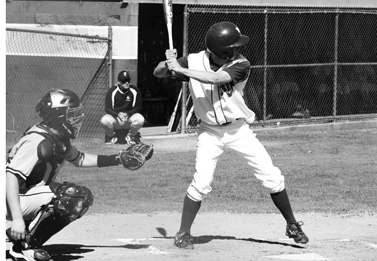 Asian minority argues that lack of cultural variety within team is offset by sportsmanship.

Junior Steven Chung has gotten used to being the only Asian on the baseball team.

After growing up in San Diego, Calif. and after playing baseball for over 10 years with only white and black players, being the minority-in this case, the only player of full Asian heritage, though there are a handful of mixed race players- is definitely nothing new to Chung.

“When I first moved here, I sort of expected that there would be a lot more Asians on the team, but I wasn’t surprised or anything when there weren’t because it’s kind of a ‘white’ sport,”Chung said.

And what is the definition of a ‘white’ sport? Chung simply laughed. While it seems clear what he meant, this hasn’t always been the case at MVHS. The baseball team in 2008 had four Asian players. The team in 2007 had three. And the current JV team is even more ethnically diverse.

Head varsity coach Brian Sullivan accounts for the notable difference in statistics during recent years with the increasing number of Asians, now over 70 percent, at MVHS. Cultural differences also play a large role in the lack of diversity on the team, and even though there are famous Asian major league players, baseball stars like Japan’s Ichiro Suzuki don’t appear out of nowhere.

“At [MVHS], the population of Asians seems to be more interested and geared towards individual sports because it makes time management easier,” Sullivan said.

In short, independence is key for those who want to excel in their studies. Junior badminton player Sam Jiang agrees that in individual sports like badminton, practices are relatively flexible which could be why the badminton team is almost entirely Asian.

Rushing home from practice every day prevents Chung from starting homework until late at night, making it difficult to balance his own academic expectations with sports.

“If I’m behind, I have to miss practice,” Chung said. “I guess it’s just different in Asian cultures, or at least in my family.”

Since 2001, Asian teams have played in seven out of 10 Little League World Series Championship Games, winning three. However, senior baseball player Ryan Winston notes that the local Little League team is primarily made up of white players.

“Most of us on the baseball team have played in Little League together, and since there aren’t many Asians from the start, there aren’t too many now either,” said Winston.

On the other hand, Winston believes that at MVHS, there is lack of diversity in the Asian population itself.

“Most Asian players that come to the United States to play are Japanese, and because [MVHS] has more people of Chinese descent, it’s not too surprising that there aren’t many Asians,” said Winston.

Of course, MVHS’s varsity baseball team has slowly developed its own culture as well. Chung is seen, like every other player, as a vital member of the team, even though his last name may make him stand out from the crowd.

“I guess other people sometimes make jokes about it,” Chung said. “Like, if I miss a play, they’ll be like, ‘Open your eyes next time!’ But there’s definitely nothing against Asians or anything. It’s all cool.”