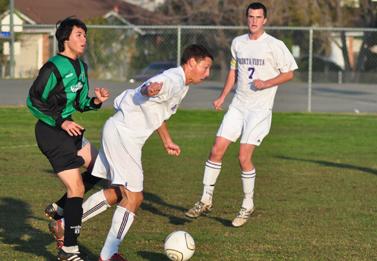 The Matadors looked to redeem themselves after a previous loss to Cupertino High School earlier in the season. They went above and beyond what they wanted to by scoring early on leaving Cupertino to chase them for the rest of the game. A powerful start by the Matadors (3-5-3) gave them all the momentum they needed as the team shut out Cupertino (1-7-0) 4-0 on Feb 9. “We did everything well,” junior Boson Wang said. “We possessed [the ball] well, we shot well, the only thing we did not do very well was keep our cool cause we almost got into five fights.”Within the first minute of the game, the Matadors scored their first goal. After weaving through the defense, senior Michael Kute was able to fire a shot past the goalie straight into the right side of the goal.The energy created from the first goal was apparent as the possession time heavily favored the Matadors for the rest of the half, while Cupertino was still left without a single shot on goal for the first 20 minutes.By the twlefth minute, junior Dustin Polgar was able to head in a goal into the net to make it 2-0 at the expense of absorbing a strong, accidental kick in the stomach from a Cupertino player. Luckily, he was able to continue in the game.

Only a minute after, senior Josh LeFevre capitalized on a breakaway from a turnover as he got the ball through the goalie to make it 3-0. After shooting their first shot high above the net after 20 minutes of play, their offense faltered again, not being able to create another scoring opportunity for another five minutes.In the second half, Cupertino’s stepped it up as the Matadors had trouble breaking through their defense. However, the Matadors were still able to find holes in the defense as Kute passed the ball to sophomore Chris Koski to make the game 4-0. Cupertino soon had a corner kick as their first scoring opportunity of the second half, but they failed to capitalize as they kick went straight into the hands of goalie senior Jeremy Dor. From then on, both sides were at a stalemate. The ball stayed near midfield as neither side was able to get through the other team’s defense.“On the second half we worked harder and we got some fire into us and wanted to win,” Cupertino senior Utkarsh Sharma said. “We did not want to get embarrassed.”Cupertino’s goalie seemed unstoppable after giving up the goal in the beginning of the second half.  Koski had a scoring chance as he shot towards the goalie’s right side, but was blocked and the ball ricocheted to another Matador who passed back to Koski for him to launch a second shot at the goalie’s right side, which was also blocked.Although Cupertino did improve their defense in the second half, the Matadors were still able to shut out Cupertino 4-0. The tough competition lasted all throughout the game—senior Julio Pereyra even got a yellow card in the last minute.“We slowed down in the second half for sure,” freshman William Major said. “We could have kept on going and made it 6-0.”The Matadors will be playing Milpitas High School on Feb. 16 at home. This game will be the last game of the season and their senior night.