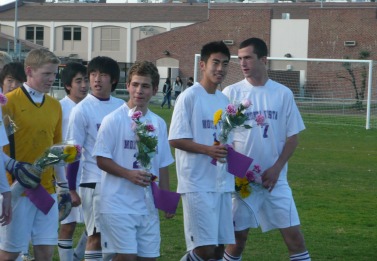 The senior Matadors on the boys soccer team ran to the field with smiles as they celebrated their last game of the season holding flowers and taking pictures with their parents. A large crowd filled the balloon covered stands awaiting to see the last game of the season.Their Feb. 16 senior night game proved to be a tight match as two potential goals for MVHS were cancelled due to offsides. The varsity boys soccer team (4-5-3) lost 2-1 against Milpitas (10-6-2).

Five minutes in, senior Nathan Burroughs attempted to cut off a Milpitas breakaway, but accidentally kicked the ball in for an own goal.In the second half, a goal by senior Josh LeFevre tied the game, but only a few minutes later Milpitas scored the game-winning goal off a penalty kick.The offense from the Matadors remained strong by keeping the ball mostly in Milpitas’ side, yet the Milpitas defense excelled in breaking up most of the Matadors opportunities.  The Matadors defense also excelled in eliminating most of the offensive plays by Milpitas.“We just wanted to get a win or tie,” junior Aaron Ho said. “If we got a win or tie we would have knocked Milpitas off their first spot and then they wouldn’t advance to the next league.”The rough start for the Matadors did not seem to affect them as they dominated in offensive chances for the rest of the half. At seven minutes, senior Alex Onishi took a pass from senior Michael Kute and shot just above the post.At the 20 minute mark, junior Malek Bashti weaved through the defense to shoot a goal in, but was soon waved off, as he was offside. By the end of the first half the score was 1-0 Milpitas.The offense from the Matadors continued into the second half where at the 41 minute Bashti tried to head in a goal, but missed wide to the right. The Milpitas defense stayed strong, still not allowing a goal to go through.After 50 minutes, the Matadors avoided falling farther behind as Milpitas freshman Jesus Gonzalez kicked a hard shot towards the goal that curved just right of the post.Finally the Matadors were able to break through the Milpitas defense as LeFevre came from the left and shot the ball past the goalie into the right corner of the goal making it 1-1. The momentum from that goal soon ended when Milpitas senior Andrew Shin was allowed a penalty kick after getting tripped in the penalty zone. The shot went right above senior Jeremy Dor’s right hand to make the score 2-1.The Matadors offense still did not falter as they pushed to get one more goal. LeFevre passed to Kute as he headed it in the left side of the goal, however for the second time in the game the referee called it offside.In the last 15 minutes of the game the Matadors stepped up their intensity as they tried to get the tying goal. The Milpitas defense, however, was still as strong as ever breaking up every single one of the Matadors opportunities. As they game was reaching a close, the Matadors pulling their goalie to help out add an extra man on offense, but still proved to be unsuccessful.““I think everyone played their hearts out,” sophomore Chris Koski said. “We made a few mental mistakes that we could have cleared up, but it is what it is.”The Matadors’ senior night game ended with a score of 2-1. The varsity boys soccer team end their season with a record of 4-6-3.