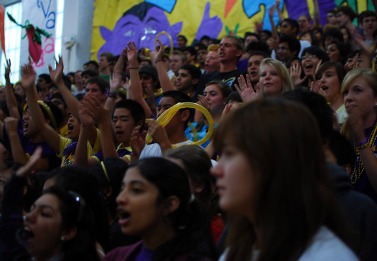 On Jan. 28, the lights of the gym will be out. Instead, all of the classes will put up their own lights to light up the gym.

“[This rally] is going to be more about getting attention to your side of the gym,” class of 2013 social manager sophomore Hadar Sachs said. “I know they are going to put spotlights in the center of the gym. Four corners of the gym with blazing lights.”Although the main gym lights will be off, visibility should not be an issue due to the bright lights coming from each class. Performances during the rally will also find a way to make sure they can be seen.“We actually have more performances during this rally than usual, but they have all been told the lights will be out and that if they want to be seen they have to deal with it themselves,” ASB social manager senior Yeshar Hadi said. “ I know that Bhangra should be having glow sticks, so they are going to work with that and they are going to make it look even cooler, so you would prefer to have the lights out having them doing what they are doing as opposed to having the lights on.”The Winter rally is usually seen as a test rally, when ASB can try new ideas that would not be possible in any other rally. During the Winter rally last year, the classes teamed up, instead of each class competing individually. ASB this year is going back to a black-out rally, but the Technicolor Rally will differ from the black-out rallies from the past.Due to the passing of teacher and coach Ron Freeman, there will be no inter-class competition. Several decorations and cheers will also be made to honor him.{cc-by-nd}