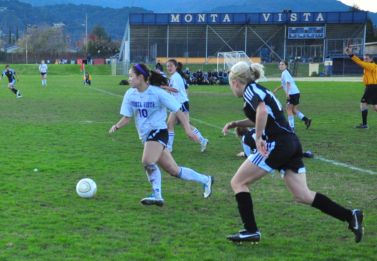 Despite disadvantages and a slow start, the Matadors cleaned up their plays to a draw 1 to 1 in the second half

In the first league game of the season, the varsity girls soccer team managed a draw against Mountain View High School. Despite a slow start and setbacks in the preseason, the varsity girls soccer team received a boost in self-esteem from the 1-1 tie against strong and experienced Mountain View on Jan. 5. The game-deciding goal by co-captain senior Zohar Liebermensch occurred after the girls improved their passing near the end of the second half. A confident Mountain View’s defense slumped when Matador forwards began to pass accurately. “We are like the San Francisco Giants,” coach Alan Kute said. “In August, they weren’t that good, and then they came on at the end.”

A muddy field, lack of practice over break, several injuries, such as juniors Gabby Ley‘s at Powderpuff and Claire Nastari‘s in preseason, and 11 new players set MVHS up for a tricky game. They could not possess and control the ball in the beginning due to the Spartan forwards’ obvious advantage in speed and clean execution of plays and passes. Mountain View has played with MVHS at CCS before and is one of the teams to look out for as the season goes on. Throughout the first half, MVHS was consistently on the defense—although a disadvantage, they successfully kept the opposing team from entering dangerous ground. Attempts to escape the defensive ruts with runs down the field by Liebermensch and sophomore Hadar Sachs, who sprained her ankle also in this year’s Powderpuff games, were stolen by the swift Spartans. Twenty minutes in, sighs of frustration and calls of encouragement could be heard across the MVHS team. The Spartans increased aggression while Berkeley-bound senior Sandra Ley showed her annoyance with referee non-calls on potential fouls. By the end of the first half, missed passes and being trapped in their own half of the field brought about the feeling that the game was a dead end. Early in the second half, Mountain View senior Tavanisha Crum scored a goal to put the Spartans up 1-0 after goalie sophomore Gal Haroush left the net wide open due to a miscommunication.“Our [team] chemistry was a lot better than [MVHS’] and quickness [was an advantage we had],” Crum said.  After the Spartan goal, MVHS moved deeper into the offense. Sophomore Jenica Wang’s attempted goals flew over the cross bar, co-captain senior Cheryl Tom’s shot sailed past the left goal post, and sophomore Casey Kute’s offensive efforts seemed to bring about false hopes.However, the struggles paid off with Liebermensch’s goal near the end of the second half. The goal was made possible by the forwards’ noteworthy passing play. Aggressiveness near the goal and attention to accuracy, skills coach Kute would like the team to improve on, finally was seen in this finale.

“We are like the San Francisco Giants,” coach Alan Kute said. “In August, they weren’t that good, and then they came on at the end.”

“I think we scored [in the beginning of the second half] and subconsciously we felt that if we’ve got the goal we can just defend,” Mountain View’s coach Simon Cook said. “The reality is, against a team as good as [MVHS], you can’t do that.”MVHS will play at Homestead High School on Jan. 7 at 3:30 pm.
{cc-by-nc-sa}