Track and field with lights passed 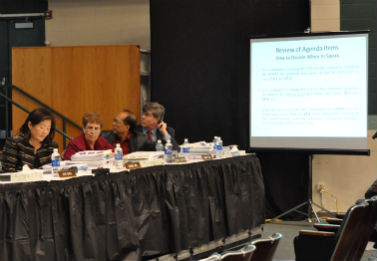 After five hours of deliberation, the FUHSD Board voted yes on building

The Homestead High School Auditorium was silent.  Eyes focused so intently that pairs of laser beams seemed to bore directly into the heads of District Board members; eyes urging them to vote on their side.A journey that began with the passage of Measure B in June 2008 is not over yet, but it has hit a major landmark.On Dec.16 the Final Environmental Impact Report and the project to build the track and field with lights was passed for MVHS.EIR and FEIRThe Board opted to hire a company to conduct an analysis of the impact that building the track and field has on the community in 16 different categories including the addition of light, chemicals, and noise. The Board published the initial EIR and after modifications were made, published the Final EIR, or FEIR.“It is a way to get real technical data from a trained organization,” superintendent Polly Bove said.The California Environmental Quality Act has standards for what is a significant impact or not on the environment.  The main finding of the EIR was that the lights cause significant impact because of the noise they bring with them. There are different standards for the tolerable amount of decibels during the daytime and during the nighttime and the originally proposed plan exceeds these decibel levels.

Though the district is not required to follow these standards, they chose to do so with the option that they voted on.The document, which has to be certified before the Board can move on and decide what is to be built, passed with a 100 percent vote after two hours of presentations, conversations, and questions.That was the easy part.Deciding the projectAgenda item 13.6, “Deliberation and approval of MVHS Sports Field Improvements and Lighting Project,” was now up at bat.The board had seven options. They could choose the project as originally proposed with lights every Monday through Saturday during all months of the school year on one end of the spectrum and on the other, have nothing built at all.Students, coaches, and neighbors alike took their turn at the microphone sharing why they thought the field and lights should or shouldn’t be built.“It is not just about sports like football, field hockey, soccer and track there are also band, cheer, dance, song, leadership and other activities that represent the entire MVHS community,” said ASB president Daniel Ki. “Homecoming is one of the biggest events that we have on campus and it is a complete embarrassment that our homecoming can not happen at home.”A motion was made to pass Option 5 and was passed with consent of all board members.

“The [candidates that] really aligned themselves with an anti-construction position were defeated by the public across our district,” Board member Nancy Newton said.Now that the project and parameters have been set, the Board will now continue on its journey by overseeing construction and monetary allocation.