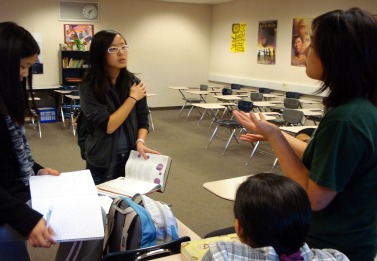 Look past the boundaries of Cupertino and maybe even the country, and some gender inequalities become apparent. MVHS NOW realizes that gender inequality is still a big problem throughout the world and they have decided to take the first steps to fix it.

MVHS NOW, based off the organization National Organization for Woman, aims to spread awareness of sexism and sexual discrimination still common throughout the world. The club was started by five girls with a mission to get rid of gender inequality.“There is a lot of social issues in the world right now,” MVHS NOW vice-president sophomore Stephanie Chang said. “We are trying to abolish stereotypes and try to raise awareness because a lot of people are not aware that women are being [mistreated] in society.” On the surface, modern gender stereotypes do not seem harmful, but Chang views these stereotypes as one of the most problematic gender imbalances at MVHS. “My father thinks women should wear skirts and be proper and that really [angers] me because I am not like that,” Chang said.Although MVHS NOW is just starting out, they have already brainstormed ideas for many meetings to come. Through their future fundraisers, speakers and discussions, MVHS NOW plans on making people realize the severity of gender inequality.“It is unfair that in certain places there is a really large gender imbalance, like women have less rights or they are discriminated against,” MVHS NOW president sophomore Kari Ding said. ”Some people don’t know that in other places [gender inequality] is a huge issue. We are hoping to hold discussions, so we can get an open minded perspective of what is going on” MVHS NOW plans to make the first step towards making a difference. Gender inequality and stereotypes do not seem harmful, but any kind of inequality is an issue to MVHS Now. Through the ideals of MVHS Now members and the actions they are taking, gender inequality can become less of a problem one step at a time.{cc-by-nd}