More than the robot to robotics team 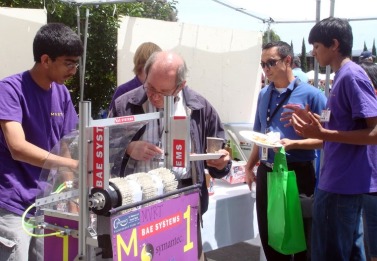 The members of MV Robotics Team #115 are known for one thing—creating their award-winning robots, year after year. However, beyond being involved in the technical aspects of the team, members also take on roles as educators and volunteers to make a difference both locally and abroad.

In the Bay Area, the team makes presentations at conferences, technology events, and elementary school programs, and also mentors 12 other robotics teams in the region. In the past year, Robotics has also raised funds and support for Haiti and schools in India.

Officers showcased last year’s robot at the biannual ZER01 technology and art festival in San Jose, which was held from Sept. 16-19, upon the request of BAE Systems, a primary sponsor for the team. The team has also given presentations at events for Lockheed Martin and NASA, both of which are also key sponsors.

“Companies sponsor us and ask us to give back to the community,” Director of Engineering senior Karthik Kumaravel said. “We want to show appreciation for our sponsors, so if they ask we always try to get involved in that.”

The team also seeks out community events to demonstrate at, such as the Cupertino Fall Festival and Lunar Parade. At Toys for Tots events over the past two years, children were guided on how to maneuver the robot, which last year was designed to play a version of soccer on the competition field of the FIRST competition. FIRST, which stands for For Inspiration and Recognition of Science and Technology, is an organization which runs the FIRST Robotics Competition, the robotics league the team belongs to.

“A goal of FIRST is to inspire young people [to pursue] engineering and technology,” Kumaravel said. “CUSD got rid of [the Gifted and Talented Education program] because of budget cuts, so we took that opportunity and [now] basically run the entire GATE program at Lincoln [Elementary School]. We have a 10-week curriculum and teach them about aerodynamics and such, basically to get them interested in engineering.”

Robotics is also looking to mentor other robotics teams in the region. Last year, they mentored four teams at the elementary school level and eight at the middle school level. This year, they are looking to start a team at Fremont High School, as it is the only school in the district without a team.

The team’s community outreach earned it the Chairman’s Award at the Silicon Valley Regional competition last year, a highly prestigious award recognizing the team for spreading science and technology throughout its community. The team hopes to continue supporting charities such as Empower Kids, which aids school systems in rural parts of India, and schools abroad, such as the Birla School of Technology and Science, India’s first robotics institution. With the support of last year’s Director of Operations Arun Kuchibhotla, a class of 2010 alumnus, the Bits Pilani robotics team was able to compete in the United States and won third place internationally.

This year, the team is working with other teams to create a robotics-focused curriculum for local summer camps.

“[Last summer], all the children [at the camp] seemed pretty interested in robotics,” Mechanical Lead senior Abhijaat Kelkar said. “[Our outreach] gives the public more exposure to what FIRST is.”