Principals from across the world 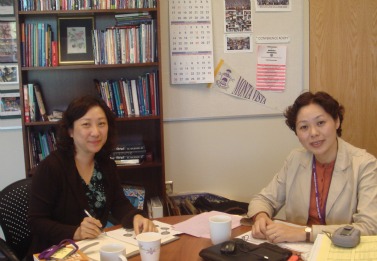 In Shanghai and most of China, students stay in the same classroom for three years, and the teachers move periodically to different classrooms to teach their subjects. They also don’t believe in independent study over there.

As part of the partnership between the California School Board Association and the Shanghai Bureau of Education, two principals from Shanghai arrived at MVHS on Oct. 3 and began to shadow their host, Principal April Scott.

“Each educator that comes has to have some kind of a project in mind,” Scott said. “The government of Shanghai is looking for ways to [gradually change their system to become] less structured [and] more collaborative.”

For the two principals this year, their project is centered around the topic of homework. As a result, they have done extensive studies and surveys around MVHS to get a feel for the workload on students.

“We talked to a few students and they told us they had two to three hours of homework on average daily,” Lu said, in Chinese. “This is really different from Shanghai, where it is natural and almost expected to have much more homework per day.”

The two principals feel as though the differences impact the values that they stress inside the classroom.

“In China, you have this responsibility as an educator to help your students,” Lu said. “Teachers and administrators take the students’ studying very personally, almost to the point where their success is your success.”

It is also these differences that make the communication between the two parties so difficult, as the language barrier also makes large discussions especially confusing and time consuming.

“The more voices that were going on, the more challenges they faced because they couldn’t track the voices. We spoke way too fast and used way too many colloquial terms,” Scott said. “At big meetings, I would feel badly for them. What would happen [after the meeting] is that I would spend the next hour telling them what happened during the meeting.”

Despite the difficulties, the principals have begun to understand the important basics of the education system. For Lu, she realizes some of the benefits of the American education system can certainly be employed in the Chinese system.

“It’s what you call ‘counselors’ here,” Lu said. “In China, we don’t have these. We have people in classrooms called ‘class teachers’ that serve the same purpose, but we don’t actually have counselors who work exclusively for a group of students to prepare them for the future.”

As the end of the collaboration draws nearer, each party reflects on their experiences in a positive light.

“Within the [previous] one week collaboration, we tried to pack so many things into one week that it was almost artificial,” Scott said. “With three weeks, they’ve really become familiar with the campus, and it gives a [much more natural feel] of the school in general.”

Although the Shanghai principals have four more weeks of shadowing at another school in Los Angeles, they still feel as though their time in America will not be enough.

“We’ve just scraped the surface,” Hu said, in Chinese. “Because there wasn’t very much time, we didn’t really get to really answer all our questions completely. However, we still definitely enjoyed the time we had here.”