Movie: ‘Secretariat’ races away from success 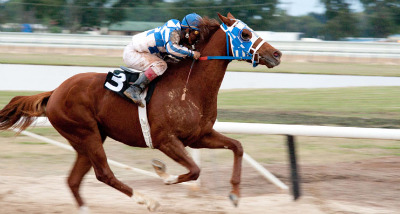 The lights shine in the stadium. The rider leans over with a strained forehead. The horse snorts.

As if we haven’t seen that scene before. The new Disney movie, “Secretariat,” in theaters Oct. 8, attempts to provide a new spin on the traditional believe-in-your-dreams-through-the-metaphoric-racing-horse movies. The true story of the horse, Secretariat, which won the three races in the Triple Crown for the first time in 25 years, circles around the message of success when everything is against your odds. However, it needs to be portrayed in a truly new way to gain some recognition. Although the movie slightly alludes to a unique twist on a classic theme, at the end of the day, it flops as a film only for old fogeys—nothing your average high school student would find inspirational.

The beginning scene sets the rest of the film with your normal, tight knit, chaotic Denver family in 1969. Penny Chenery (Diane Lane), the typical housewife who aspires to fight for her pre-marriage dreams with the feminine confidence that shocks most men, whips eggs while the rest of the family circles around the kitchen table discussing their daily lives. A sudden twist breaks the subtle western humor and the plot begins to develop. But don’t expect the next scene, or any scenes after as a matter of fact, to jump out of the same old, same old idea.As Chenery hears about her mother’s death, adopts her ill father’s stables and falls in unconditional love with a foal, the emotional journey incorporates the ever-so redundant, melodramatic scenes, with sappy background music and cliche, teary-eyed acting.

By the time the film ends and Secretariat can boast his Triple Crown victory, the only noteworthy aspect of the film resides in the actual horse races. Each of the many races was filmed in a different way. Close-up shots of horse hooves and eyes and shifts between fast and slow tempos cause you to forget about the predictability of the climactic scene for a split moment. In Disney’s attempt to step away from the stereotypical horse movies, their cinematography was the only point of success.

Because the visual appeal is the only thing supporting the movie, “Secretariat” would be a complete waste to watch on DVD. If you are set on catching this story about “the greatest race horse that ever lived,” race to buy a ticket at the theaters. If you don’t care for aesthetically pleasing movies, “Secretariat” will only leave you with a horse race plot that is much too copious in the film industry.

Before the movie hits the theater, let me warn you. As Secretariat leaves a trail of dust behind him, the movie will only leave a bad taste in your mouth.