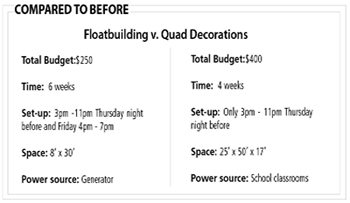 Replacing floatbuilding with quad decorations has its own advantage

Starting this year, floatbuilding is a thing of the past. Thanks to much debated Measure B, all schools in the FUHSD have been granted a large sum of money for school renovations such as the new track and parking lot. However, this means homecoming floats will not be possible. Although it may be hard to let go of this old tradition, this is a blessing in disguise, due to the new Homecoming competition: quad decorations. More students will be able to see them, and better appreciate them. The three buildings in the academic court will be split among the classes this year. Each class will be given four weeks to decorate their respective buildings according to this year's theme: classic cartoons.

Many people may be upset over the departure of the floats, but is it really such a bad thing? After all, floats never really did make much sense, did they? Decorating an old truck and driving it around the track at another school? What about that is supposed to excite students? Try explaining that to a student from another district and see if he understands. Hint: he won't get it. With Quad decorations, our classes can take advantage of our campus by putting the decorations up where students can actually see and appreciate them, not at Cupertino High School.

Whether it's lack of school spirit, laziness, or just disinterest, a surprising amount of students do not attend homecoming. Sophomore class officers Cathy Ang and Thomas Barber estimate that only about 100 or more students from each class attend the Homecoming football game every year. That means the majority of students never even see the floats that our class officers put so much effort into making. This is obviously a huge waste of resources and effort. Not only that, but it fails to raise significant school spirit, as well. But with the new quad decorations, all students will be able to see just how clever and eye-catching the decorations can be without driving out to another school.

With float-building come so many practical disadvantages, none of which apply to quad decorations. There is a lot more space to work with, letting more kids participate and be even more creative because of all the work to do. Stable building instead of moving vehicles means more three-dimensional decorations, more cool technology, and stupid gadgets. The buildings have a stable , constant source of electricity to fuel more elaborate decorations, and are easier to transport materials onto. There is so much more that can go wrong with a moving gas-powered vehicle than a stationary building. Whose idea was it to make a bunch of paper decorations, haul it into a car, drive to another school, and put it all back together? Talk about a hassle.

The entire purpose of float building is to give students a sense of pride for their class and to unite them under one theme. It's obviously a very hard task to carry out, but it's even harder when most of the class won't even be able see the float. Decorating the Academic Court would be a natural change whether or not float building was possible this year. It's a better option, students get to observe it instead of watching it drive by, and it gets more carefully judged. So just move on from floats, they weren't that cool to begin with.