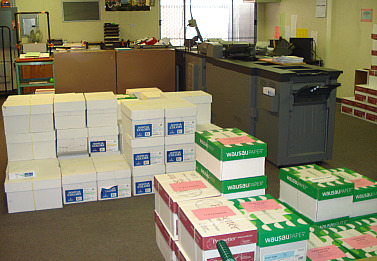 Printing papers had never been an issue before, but due to recent budget cuts, administration created a plan to save money while saving the environment at the same time.

The changes to go green, originally put in last year, showed a big decrease in the number of copies printed. This year, administration plans to make no major changes because of the success from last year.

To reduce the number of copies printed, each teacher now uses his or her own copy code for printing, instead of a department code. Department codes did not work because nobody received feedback, causing teachers to pay less attention to how many copies they printed. A copy code, however, allows the school to make a report on how many copies each teacher has printed by tracking everyone individually. This method provides an incentive for teachers to find ways to cut down by providing individual feedback.

Teachers do not have an explicit printing limit, but were only asked to cut back on the number of printed copies. Now teachers print double sided copies and maximize the space on available on each piece of paper.

“[Printing less] is better for the environment. [Using] less paper costs less, so funds can be moved elsewhere,” English teacher Jackie Kolbeck said. "It is a good way of changing up how to get students the information they need."

With the new methods, many teachers changed how they gave out information by putting homework and handouts on School Loop, rather than printing it at school.

“I used to make tons of copies,” Chemistry teacher Elizabeth McCraken said. “I made big packets all the time and now the students are making those copies at home.”

It is still questionable though if these changes really help save the environment. Handouts put online, are mainly used for students to print themselves. The same amount of paper is being printed, but now at students' homes, instead of at school.

“Teachers are making us print at home a lot, which I do not see how is green because now we are wasting our paper and our ink, instead of the school's," sophomore Kadhir Manickam said.

For the school though, the plan has worked successfully. The number of copies that the school prints has been significantly reduced from previous years. Although it is uncertain if the methods really do help save the environment, the changes have cut down on paper usage and are saving money in the school’s budget.