How much is that teacher in the window? 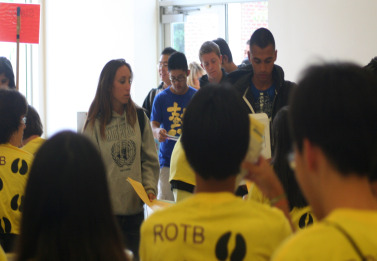 With teacher shopping at ROTB, our proverbial credit card has been maxed out

Soon after students found out that they would not be able to enter the year armed with their dream schedules, they spent a good deal of bandwidth on Facebook and Gmail, fuming about the absolute injustice of it all. The news was out: students would not get to change or even see teachers before school started.

While this reaction seems natural, it is actually unfounded. From an ethical standpoint, the policy is completely necessary. Not only would “teacher shopping” cost the administration more time and effort to arrange schedules to suit students’ fancies, but who has considered the teachers in the equation?

It is unfortunate that students have had such power over the reputation of a teacher, and students can very easily abuse that power. We already have, the way we've swapped them as though they were monkeys in a zoo transfer. What students seem to forget is that the administration actually reads feedback forms, and that those forms are not for ranting. That is what personal blogs are for. If these rants were actually to be used to make changes to the staff, the changes would be based on claims that cannot be supported.

Though many of these teachers may seem like they do not care about us, remember that students’ thoughtless comments have not quite endeared teachers to us. Face it— when students walk into a class, they expect to be entertained. Let’s not let this attitude turn registration into more of a popularity contest than it already is.

All ethics aside, everyone is understandably upset because they have lost one of the only home field advantages they had to handling the curve-balls each year. But if one were to think about it, only a select few were actually able to change teachers each year.  Now, the playing field is much more level than it was before— for teachers, students and for the administration.

It can safely be said that we now have to resort to the supposedly more primal methods to get an advantage. Like reading. Learning. And perhaps even studying.