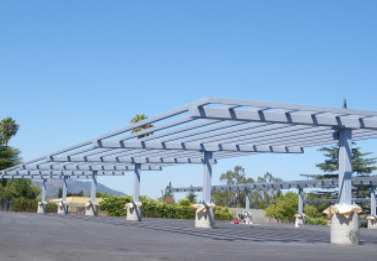 During the summer, the asphalt of the old parking lot was scrapped and a remodeled version took its place.

Construction of the student parking lot began on June 11, the day after the class of 2010 graduation ceremony. The remodeling yielded numerous changes including improved lighting and smoother pavement. Narrower lanes and angled parking have been added, allowing for the addition of 50 new parking spaces. The new drop-off and pick-up zone creates a better flow of traffic by getting rid of extra cars in the parking lot. The biggest addition are the overhead solar panels, which provide shade for the vehicles and generate electricity for the district. These solar panels, in conjunction with ones at other schools in the FUHSD, will help save approximately $1 million in energy costs and reduce carbon emissions by 1100 tons.

The old parking lot had been repaved several times, but never in its history had it been remodeled. Prior to reconstruction, the parking lot was filled with worn-down speed bumps and missing wheel-stops, made worse by poor lighting and cracked asphalt.

“The veining in the asphalt had gotten so deep, they were actually going to have to scrap it and take the asphalt off,” Principal April Scott said. “[They needed to] get down to the bedrock and redo it.”

The parking lot was given a chance to be renovated when Measure B passed in 2008, by granting the district $198 million in school bonds. The district used this money to build a new student parking lot.

After an entire summer of construction, the student parking lot is now open; however, work to connect electricity to the parking lot will continue after the beginning of school.