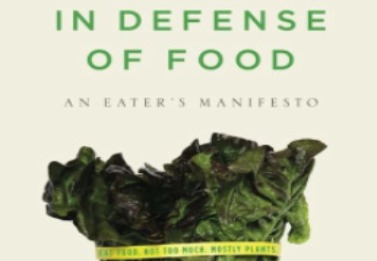 Author and journalist Michael Pollan reveals the truth behind food

Sometimes it becomes easy to blame our bad health on bad food, but it’s really us at fault. Our dietary problems, author and journalist Michael Pollan believes that is it not the food, but us who are the culprits. In Pollan’s new book, “In Defense of Food: An Eater’s Manifesto”, he explains why America has adapted such unhealthy eating habits—in an overly verbose manner. Pollan’s motto of “Eat food. Not too much. Mostly plants.”, found in the beginning of the book, could easily sum up the entire book, but he goes on for 200 pages about the history of food and how it has evolved into something that is not really food anymore. Instead it has become an object of what Pollan describes as the ideology of nutritionism. Most Westerners believe in this, that “foods are essentially the sum of their nutrient parts”.

Throughout the novel, it is clear that Pollan is not fond of nutritionism. He splits the book into three parts — the history and development of food and nutritionism, the connection between the Westerner’s diet and diseases and lastly, the way we should eat. Halfway through the first part, Pollan becomes repetitive. He beats around the bush of his own motto just so he can fill a couple hundred pages to make a book, weakening the quality of his work.

Although Pollan does make good arguments—that we have become more unhealthy because we are trying to stay healthy—he also expresses his dislike towards the Western ideology of nutritionism, food science and nutrition science, which takes away from his informative tone and weakens his professionalism. His tone thus becomes tinted with arrogance and condescension.

However, Pollan does a magnificent job in connecting the dots between his resources. He breaks down the truth behind our food and the real meaning behind the nutrition labels and common, but untrue, “healthy” beliefs. He is able to smoothly incorporate research reports with his own thoughts, but he lacks the ability to persuade readers to eat “correctly.” Even though the book mainly cautions readers to be aware of what they are truly eating, it’s still like any other self-help diet or nutrition book, providing thorough reasons for why and how to eat right, but lacking motivating words for readers to actually act.

Unless you are willing to go round and round until all that bad food is out of your system, “In Defense of Food” may not be your cup of tea. But if you just want to learn some science behind nutrition, then take the ride on the merry-go-round.