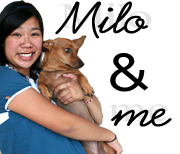 Milo and my mom get hit by a car

On Feb. 10, I’m half asleep when I picked up my cell phone at 6:08 p.m. At first, I didn’t hear or understand what my mom was saying until I heard through her frantic voice, muffled by tears,  “Milo and I have been hit by a car. Milo’s in pretty bad shape.”  Nothing horrified me more than seeing my mom come out of the car (the lady who hit her drove her back home), in pain and shock, with Milo in her arms. His eyes were wide open and dilated. He did not move or flinch at all as my mom laid him down on the driveway. I could barely tell whether he was breathing or not. His back right hind leg was bleeding. I thought he was dead.

After the ambulance took my mom to the hospital, we took Milo the animal hospital. The veterinarian turned Milo over on the examination table and that’s when my heart sunk and I began to cry. It was worse than I thought. Milo’s front left leg was horribly cut, covered in blood and stuck straight out, unable to bend. He had a hideous road rash on his chest, exposing his furless pink flesh. A couple more bloody cuts on his other legs, a few ripped paw pads with blood oozing out were discovered. His mouth was like the joker’s—a red road rash extension up his jaw line. It’s unbelievable how much damage can be done for someone who was going 15 mph. There are times when I’m driving around just a tad bit faster than the speed limit and believing that there was no harm in doing so. If the driver had gone the speed limit of 25 mph, who knows what damage it could have caused. Luckily, Milo and my mom did not break any bones, but they are both badly bruised and in pain.  Seeing those wounds, I didn’t know what to do or how to act. I became even more uneasy when I learned that Milo had to be put on morphine to ease his pain and be started on an IV drip. Being such a small dog with small veins, it took about a good 15 minutes for the vet to find his vein on one of his two semi-good legs. It was scary to think that he might not be able to get an IV. The most heartbreaking part was when the veterinarian told us to not touch (more like comfort) Milo anymore because he would bite anyone, regardless of whether or not he knew us, because he was in so much pain. There was a look of fear, pain, anger and sadness in his wide, black eyes. A few moments later he lifted up his lips to show his teeth, and soon tried to bite the veterinarian. The first few nights home were a nightmare. Milo was in so much pain that he was unable to sleep and wouldn’t let anyone touch or help him. We constantly need to change his wound dressings, shove three pills down his throat, stay up at night with him and carry him out to the backyard. Because three of his legs were bandaged up, all he was able to do was lie on the couch and cry. It’s a horrible feeling to know someone you love is in pain and you can’t do anything about it. Now, he has learned to walk (or hop) around the house with three legs. However, he still does not eat or sleep and our once cautious dog has become even more aware of his surroundings. He’s startled by any noise, like the rustle of a paper bag, and he seems to have developed a slight fear of cars. We never really take into consideration of how normal, everyday life routines like crossing a small street in the neighborhoods can be dangerous. It doesn’t matter how careful of a driver or pedestrian you are, there are always going to be accidents.