Turn on your subtitles 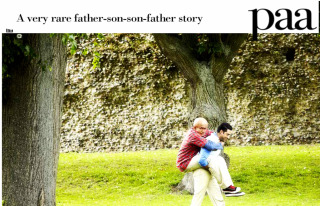 Each year, 800 films come out of the Hindi film industry. More than half are probably a waste of time with stolen music and cliche story lines. But once in a while, India hits us with a film that makes all of Bollywood worth it. This year’s "Paa", released on Dec. 4, got ready to shake up the world.

"Paa" is about a young boy, Auro, played by the world-renowned actor Amitabh Bachchan. If you don’t know Bachchan, you don’t know Bollywood. The Big B is the George Clooney of India with slightly better acting and slightly less sex appeal. The apparent exclusiveness of this movie is that Bachchan’s real son, Abhishek Bachchan, married to former Miss World Aishwariya Bachchan, plays his father. Abhishek is 33 years old; Amitabh is 67. How can these roles be switched?

With a twist. No, not a "Freaky Friday" or "Seventeen Again" twist. This twist is real. Auro has a very rare disease called progeria. Only 53 known cases of progeria exist today. Children who suffer from this disease experience very rapid aging and ailments of the elderly such as heart disease and liver failure, usually dying by the age of 13. He has the mind and soul of a 12-year-old child but the body and structure of a 60-year-old man. And thus, the son plays the father and the father, the son. The chemistry and connection between the two are easily one of the most touching aspects of the film, but the movie isn’t about the disease at all. There is no pity, no empathy. The focus remains on the family and their troubles as a whole instead of just those of Auro.

Auro is conveyed as a humorous, friendly and stubborn boy. Despite his rotting teeth and fully bald head, he has many friends, great knowledge, a love for school and even a secret admirer. Any sadness that does arise is automatically stuffed in a corner after Auro spits out his witty and incisive dialogue. The script and Bachchan’s acting work together to convert those tears into laughter and create the perfect balance on a subject that Hollywood would’ve turned into a cheese ball cry-fest.
Speaking of Hollywood, although the idea of unnatural aging might sound similar, "Paa" is not, in any bit like "The Curious Case of Benjamin Button". The premise is completely different and what makes this movie step away from "Benjamin Button" is the realism. Every second of it, from the plot to the characters is authentic, reasonable with no loose questions. If anything, "Paa" and "Benjamin Button" can only be compared in their mind-blowing special effects and prosthetic makeup of the aging characters.

A majority of Bollywood movies are musicals, and "Paa" is no different. Even though the tracks are not the main focus and cannot be given the highest high-five, the score does justice to the peaceful, playful feel of the story. The directors were also astute enough to figure out when to have silence and when to break out into a song.
Although "Paa" is Indian, it has a very modern, Western take. Auro’s mother (Vidya Balan) had a premarital pregnancy and her boyfriend had pushed for an abortion but, with a strong surface and soft core, she left him and raised Auro with her mother (Arundhati Nag). Both Balan and Nag presented spotless and incredible skill with such heavy roles. After 12 years, Auro meets his father, an ambitious, ethical politician and the plot develops from there.

The best way to describe all of it: flawless and Oscar-worthy. Any spectator can see that every aspect of this film was throughly thought out and immaculately portrayed. Whether you are an Indian or not, "Paa" will take you on "a very rare father-son-son-father" roller coaster.

"Paa" is showing at the AMC Mercado 20, and yes, there are subtitles.