The power of a penny 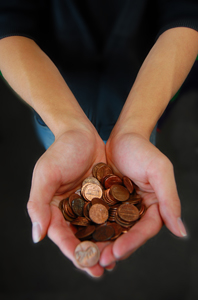 A penny weighs about three grams, but the power of a penny is not to be taken lightly.  In fact, pennies can be first steps towards peace.

The Muslim Student Association (MSA) club launched a Pennies for Peace fundraiser on Nov. 9. For the next five months the club will be collecting donations to fund New York Times bestseller Greg Mortenson’s Pennies for Peace foundation.  Founded in 1994, the organization funds schools in rural Afghanistan and Pakistan to provide an alternative form of education to the Taliban’s.
The club placed donation envelopes in all classrooms and has planned several second-semester events to tie into the fundraiser.  In January, the club will hold Henna for Humanity, a lunch-time event in which students can receive henna tattoos and raffle prizes in the rally court.  In March, the club plans to hold a House of Falafel fundraiser.  Eventually, donation kiosks will be available around the campus and community.  The club is also appealing to local businesses for funding.  MSA plans to present the proceeds of this lengthy fundraiser to Greg Mortenson during his visit to Marin County on April 14, 2010.
"We wanted to do… one huge fundraiser that all could go to the same cause," senior MSA vice president Sana Chintamen said.  "Our goal is $2000, so that’s actually less than $1 per student."
Through the Pennies for Peace program, $2000 is the equivalent of school supplies for 100 children.  Donating 15 pennies translates to one notebook, and $20 can provide for a year’s worth of school supplies for one child.  On a long-term scale, $50,000 can build and support a school for five years.
This is not the first time Pennies for Peace has been brought to MVHS.  MSA initially launched the project on a smaller scale two years ago.  The following year, Christopher Chiang’s two World History classes introduced a similar week-long fundraiser in May 2009.
Following the Pennies for Peace fund raising guidelines, students placed donation receptacles across campus, emptied them daily and eventually collected about $300.
In light of the fact that building a school would cost thousands of dollars, according to Chiang, the classes decided that "it would be more meaningful to find something tangible, so we decided… to buy a UNICEF School-in-a-Box."
According to the UNICEF website, a School-in-a-Box kit contains materials to sustain 80 students.  The box includes supplies such as chalk sticks, exercise books and carrier bags.
The fundraiser was considered a success for its five-day run, and the club hopes for a similar result this year.
"We just really hope that [MVHS] students can help us with this mission," senior MSA president Nausheen Mahmood said.
For more information on the foundation Pennies for Peace, visit http://www.penniesforpeace.org.