Saving lives in the gym 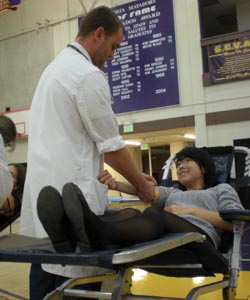 Donors were greeted in the Gym lobby, formerly known as the Student Center, with the smell of popcorn, bagels, and paperwork.  Screened by medics prior to donating blood, they were deferred in cases of low iron count, recent piercings and possible contamination in their blood.
"The actual blood coming out takes about five to six minutes," senior Kevin Wilson said.  "But the whole process of filling papers out before, getting interviewed, waiting actually took an hour."
Wilson was one of several athletes who decided to donate despite sports practice after school.
"You lose the red blood cells which have hemoglobin and carry oxygen to your muscles… If you do a lot of strenuous activity, then you won’t have enough hemoglobin so you’ll pass out," Wilson said.
Due to such repercussions for athletes, many opted out of donating blood this semester. Nevertheless, Health Commission considered the event a success.
"We got over our goal, which was to beat last year’s donation count," Health Commission lead junior Angela Gu said.
The commission strove to meet Stanford’s goal of 92 donations and exceeded about 70 donations from the November 2008 drive. The six commission members promoted the event with posters around the school and city, announcements and even small fliers on neighborhood house doors. Efforts paid off with 105 to 110 total blood donations.
For those who did not get a chance to donate blood this semester, the next blood drive will be held in March. Donors must be at least 16 years old and weigh at least 110 pounds.