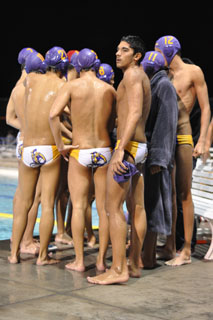 The varsity boys water polo team faced off against the Homestead Mustangs on Thurs, Oct. 22 at home. This game was pivotal because winning would mean an almost guaranteed path to CCS.

In the second period, the Matadors still struggled to find a way past the Homestead goalie while the Mustangs scored another goal making the score 4-0.  However, with two minutes and 45 seconds left in the game, junior Alex Bagdasarian, assisted by senior Jubin Honarvar ended the drought by scoring the first goal for MV.

The Matadors then prepared for a counter attack but were thwarted by multiple blocks by the Homestead goalie.  Near the end of the second period, Homestead scored again on a high lob that barely scraped through the goal, ending the first half with a score of 5-1. During half time, the boys came together to figure out a way to get back into the game.

In the third period, Homestead started off strong again scoring two goals in the first few minutes of the period, bringing the score to 7-1.  Then the Matadors began their retaliation in this Mustang-dominated game.

The come-back began when sophomore Cameron Yates scoring for the Matadors. 30 seconds later, senior Andrew Stewart scored another goal.  In a flash, Honarvar scores yet again.  The onslaught continued with the Matadors sprinting down the pool to get easy fast-break shots. Yates and Honarvar scored two more goals to end the third period with a score of 8-6. The Matadors now trailing just two points behind the Mustangs.

"During halftime, I think that we got our heads together and fired each other up by asking the whole team ‘do we want to make CCS?’," Bagdasarian said. "They also made mistakes on their part and we capitalized on them."

The run by the Matadors continued when Honarvar swam right by his defender and nailed two easy goals to tie the score at eight.

The Mustangs rallied by calling a time out and scoring a goal right after with two minutes left in the game, making the score 9-8.  With 48 seconds left in the game, Yates swam over the Homestead defender and got a clutch defensive steal.

Immediately Honavar assissted junior Nick Sinzig who exploded out of the water to tip the ball into the goal on a power play. The Matadors tie the game up with five seconds left in the game. With 1.81 seconds left in the game, number eight on Homestead is fouled outside the five meter line by Honavar, earning a free shot for the Mustangs. The Mustangs take advantage of this and send a dagger shot right past the MV goalie, junior Andrew Sabour. The Matadors lose a heartbreaking match with a final score of 10-9.

"This game affected our seating in the league tournament, and not that we lost, we probably have to play against a better team than Homestead," Bagdasarian said.