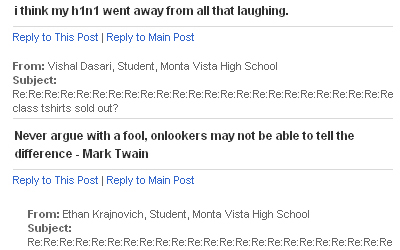 It started with a seemingly ironic post about Chemistry problems, escalated to threats of social revolution, and finally capitulated into an all-out Internet brawl. The class of 2010 has had its share of colorful School Loop discussions over the past four years (tigers vs. bears comes to mind) however senior year seems to have accelerated them into a stage of white hot Internet aggression. We don’t seem to realize however, that School Loop isn’t the venue for this behavior.

The road to the aggressive climax started on October 10, when Senior Sahiba Johar made a discussion post asking if there would be any alternative for gold card members who were unable to pick up their t-shirt during the week long distribution. What should have ended with the simple request for a reorder, went wildly astray when students began making off-color jokes about the supposedly communist establishment that is ASB.

Things quickly escalated, when Senior Waseel Adnan Amoura probed at those remarks of communism, in particular those of Senior Alexander Cheng. That comment eventually snowballed into a 98 post long thread that was a far cry from the original intention of t-shirt reorders. The textual back and forth constituted of intellectual one-liners and personal attacks against one of the party’s habit for "rocking short shorts." It even garnered outside participation, with students backing their respective parties as though it were a sporting event.

As someone who’s had a computer connected to the internet for most of his adolescent life, I am definitely no stranger to the conventions of an Internet forum. I can attest to the sense of security and righteousness of tearing someone apart behind the comfort of a monitor. And within the social vacuum that is the Internet, this is a perfectly fine way for individuals to spend their time.

However, School Loop does not fall into this category. Despite its appearance as a discussion board and its common thread structure, it has something that most Internet forums do not: accountability. There are names above the things you write. And despite what your computers assure you, you go to same school as the people you tear apart.
Maybe there are no physical repercussions for these words, but there are social implications for this behavior. How is the administration supposed to take our opinions seriously when our actions prove otherwise? How can we attest to being mature growing young adults, when there are as of this moment 171 posts in a discussion thread that from the moment of its inception, pardon my French, been utter Internet MEME crap. How should we view those in positions of power, when a member of leadership partakes in a social pecking party?

It’s our senior year, and perhaps we’re just acting out because in less than eight months, many of us will be leaving the comfort and security of another social vacuum, Cupertino. But until then, we should leave School Loop for questions about the Krebs cycle and centripetal acceleration.