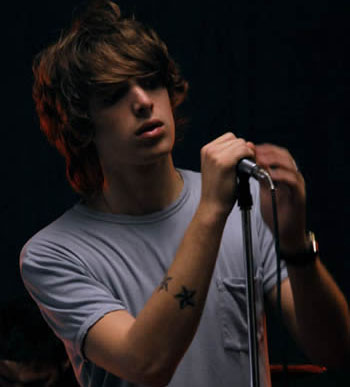 UK import Paolo Nutini showcases musical ingenuity almost unheard of this side of the pond since Sinatra.

When Paolo first ambled on stage with a beer dangling in one hand, you might have thought that he’d just gotten out of bed. And then it’d occur to you that he was probably never sleeping.

Seeming oblivious to the cheering fans around him, Nutini takes a swig of his beer and drapes himself over the mic, hanging on for support while he launches into his first song of the night with little preamble. When he sings, the 22-year-old is like a man possessed, crouching over the microphone, rocking precariously to the beat, eyes firmly shut and lost in his music. His relaxed and unassuming attitude combined with the rough, unpolished huskiness of his voice made the already small Fox Theatre feel like a homely pub somewhere in Nutini’s hometown of Paisely.

After the first few songs, including a performance of "Rewind" — an audience favorite —  Nutini looked up at the theatre’s balcony in a rare moment of communication with the audience, shielding his eyes from the glare of the stage lights. "See, there’s a balcony," he slurred cheerfully. "Hello up there!"

Though his eyes remain closed when he’s performing, Nutini opens up and looks into the crowd a few times over the course of the concert to engage in some brief, brogue-flavored banter with the crowd. With his eyes opened and attentive, Nutini has an almost child-like excitement about him. During these moments, every single person in the crowd is a little bit in love with him.

The infatuated audience also sang along to all the songs they knew, their favorites including "Last Request", a beachy rendition of "High Hopes", and his current single "Candy".

Paolo Nutini’s eclectic style — a little folk, a dash of jazz, a bit of blues, and some soul — came across as a surprisingly coherent musical journey, rather than the slap-dash performance it easily could have become. The genres’ seamless blending along with the mature and insightful lyrics and rough, rustic style brought a feeling of comfort unlike any other, because each member of the audience intuitively understandss that Nutini puts up no fronts. He made no special effort to connect or communicate with the crowd, but he didn’t have to. Cliché as it seems, Nutini’s music spoke for him, and it rang out loud and clear.