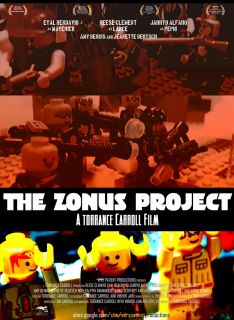 Life as a Lego character with Lego cars and buildings doesn't seem too exciting, but through "The Zonus Project," MVHS alumnus Torrance Carroll takes the childhood toy to another level.

On March 12, MVHS alumnus 2008 Torrance Carroll's well-known animated film project, "The Zonus Project", was accepted to the National Film Festival for Talented Youth, or NFFTY. Carroll began directing the film, his first feature, in his sophomore year. "The Zonus Project" is set in 2025 and consists of three parts. Using Legos, the film conveys the messages of different educational systems between political parties. The possible arguments and disagreements between the parties are shown as well through the life of one Lego man."The whole project was based on the experiences we had at MVHS. If you see the movie, you'd see a lot of MVHS references in it," Carroll said. "It's a movie on education systems and what they agree and disagree [upon] in society".Using stop-motion animations, Carroll and the crew moved the Lego characters one-tenth of a second of a movie-shot. Thousands of pictures were taken to produce a few minutes of animations.Carroll had help from many people including current MVHS students and alumni. Over 70 people were involved in the project. One of the earliest supporters was current senior Vibhor Jain, an assistant director who helped with props and sets."I was the key animator; I got a lot of the scenes started,"Jain said. "I was in charge of all the set construction, making the cars and all the transportation on the scenes."Filming started after the six months of script-writing. The first and second part of the film were screened at the MVHS's 2nd and 3rd Annual Film Festival. Due to issues with submission, the third part of the film was not able to be screened last year, and was shown with the class projects of ROP and Writing for Publication classes at the ROP and Writing for Publication screening instead. In November 2008, Carroll decided to make the three consecutive parts into one 61-minute feature."I just started submitting [the feature] to film festivals here and around the world," Carroll said. "We sent it to a lot of international [film festivals]."NFFTY, the largest youth film festival in America, accepted "The Zonus Project" and offered Carroll and other contributors a trip with V.I.P. passes to Seattle for the official screening in late April. But NFFTY was not the only film festival that accepted the film. South Beach International Animation Festival in Florida, Rhode Island International Film Festival, and the Kent Festival all accepted the project. Recently Carroll also submitted "The Zonus Project" to 50 other film festivals as well as the Academy Awards for students who are currently reviewing it."Vibhor and I never thought this would get really far besides MVHS film fesitval," said Carroll. "We spent three years and thought it'd be worth a shot to get our film out and represent MVHS and the community."For more information visit the website:http://nffty.bside.com/2009/film/thezonusproject_nffty2009