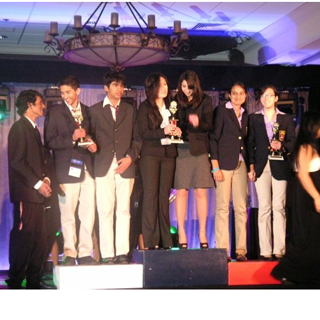 76 out of 146 DECA members placed at the annual State Career Development Conference held at the Santa Clara Mariott from March 5 to March 8, an increase from the past years.

DECA, an on-campus marketing club founded in 2002, participates not only in State Conferences but also Northern California and International Conferences. DECA is for students to receive experience in business and leadership. At the conferences, students are able to compete in individual series events or a written event.

"It was fun because we met [new] people, ate pancakes and Nerf-fighted!" DECA Silicon Valley Vice President of Fashion and sophomore Meg Begur said.  "This year it was a lot more enjoyable. Our competition was not that stressful and we got it done early, so we got to do fun stuff."

DECA Director of Membership junior Jennifer Nguyen noted that though there were more wins this year, they were projected more towards the 2nd and 3rd places instead of 1st and 2nd places.
Freshmen also placed more compared to previous years this may be due to an increased number of members.

"I think it’ll be a lot better next year [in general] because members increase every year so we can get more people to win," Nguyen , "We also know the experienced members are going to win, too."

Other than the competition, junior Diane Keng was also elected as the DECA state president.

The competitors that placed top three at the state competition will be eligible for DECA’s International Career Development Conference at the end of April in Anaheim, CA.

"Monta Vista has the highest number of attendees in California attending international competition," sophomore DECA member Pavani Putta said. "DECA really motivates you to do well since MVHS is such a powerhouse."