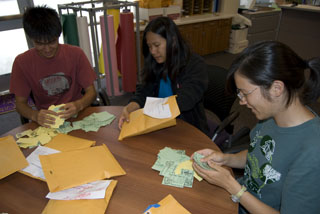 Change has come sooner than Jan. 20. After instituting the ticket system on the last Club Day, Club Commission is reverting back to the original system in which students directly pay clubs with cash for the food they purchase.

Junior Christopher Chui, senior Vanessa Ing and Irene Steves round up the earned tickets of each club at the end of the last Club Day. Photo by Daniel Stenzel

In the new process, instead of club presidents carrying a large sum of cash in their pockets at the end of club day, all cash received on club day will be entered into each club's account and then clubs will receive their proceeds after the cost of food is deducted from the fund. According to the club commissioners, this is to minimize the hassle with money administration has to handle later.On last semester's Club Day, Club Commission created a system in which students had to purchase tickets that acted as vouchers they could use at club booths. However, Club Commission received complaints about the long lines and inconvenience caused by the ticket purchasing process."You have to wait in line and you can't get the food right away," junior Imrat Sivia said. "It's a waste of time."For the upcoming second semester Club Day on Jan. 16, Club Commission decided to return to the more straightforward system with cash exchanges."We didn't want to make anything hard on the students," club commissioner junior Ashley Chen said.The commission also made improvements to the cash system to make sure clubs receive the funds they earn. A reimbursement process is added, placing more restrictions on club presidents "to make sure the money is going where it should be going," explained club commissioner senior Kunal Nagpal.In the end, all the systems that Club Commission has regulated on club days aim to make food-purchasing easier for students but at the same time give clubs their fair share of the funds raised.