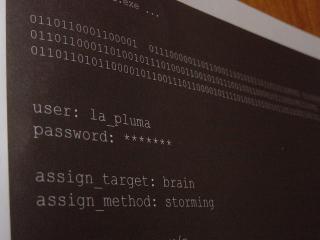 Teressa
Students' responses to MV Published Writer's first published magazine, La Pluma.
"/run la_pluma.exe… initiate scan: y/n…y". A black page with white font displayed what was seemingly a trail of computer language. Close examination of the program revealed that the wording laid out the journey of "La Pluma," MVHS' literary magazine from the club MV Published Writers. On the first day of the magazine distribution, club members ran the magazines to all English classrooms on Dec. 2. Afterward, students were seen perusing the thin booklets before tucking them into their bag. Overall, "La Pluma" received a positive response according to Somel Jammu, vice president of MV Published Writers.  By the first day of the distribution, the group had already received two e-mails applauding the magazine. Teachers also contributed to the promotion of the magazine, announcing its arrival as well as handing them out in classes. By the end of Wednesday, some classrooms had already run out of copies. The magazine contained a wide range of writing, from short stories to poetry.

"Parts of it are really good, and then parts of it are really funny," senior Sangita Annamalai said. "It's really visual and professional looking." Some students found the magazine to be intriguing, but not quite what they expected. "Visually it's really appealing, and I like how it's put together, but the content is a little lackluster," junior Sam Chen said. Chen pointed out some grammatical errors and her confusion with some of the stories Jammu, however, seemed satisfied with the current feedback. "[The president, junior Kanwalroop Singh, and I] have done the best we can to distribute and promote the magazine, and we worked really hard on it, but we're only two people, so we can only do so much," Jammu said. According to Jammu, future issues will improve, and Published Writers hopes that whatever errors occurred in "The Storming of the Brain" will be prevented.